On paper, Zomato is still leagues ahead of everyone else in the food space but online food delivery company Foodpanda has picked up enormous funding and is on an acquisitive and marketing binge.

Two years before restaurant discovery company Zomato was born, Burrp! was making quite a splash. The Mumbai-based start-up wanted to be a review site, but soon, became a destination to search and recommend food joints. Business 2.0 magazine, a Time Inc. publication, which has now shut shop, picked Burrp! amongst the best top 30 non-US web start-ups to watch out for in 2007. And then, the founders sold the company to Network18 in April 2009.

"The acquisition did not help us," recalls co-founder of Burrp! Anand Jain. "The execution got distracted and Burrp! vacated top of the mind recall."

Burrp!'s downfall coincided with Zomato's rise - the company had a better user interface on its site and was executing well. Over time, it added an app. "The mobile app revolution had begun. Burrp! did not have an app back then. Zomato took a lead," Jain, who is now working on a new start-up WizRocket, recalls. Zomato first launched its mobile apps in 2011.

Nobody talks of Burrp! now and Zomato's frame of reference has shifted to other companies. The flamboyant founders of Zomato, Deepinder Goyal and Pankaj Chaddah, meanwhile, have been dismissive of all rivals. "Does Zomato consider websites such as Just-eat.in as competition?" someone asked on question-answer website Quora around 2012. Goyal - Deepi to his friends and enemies - replied: "We consider such websites to be substitutes." JustEat is an online food ordering platform. 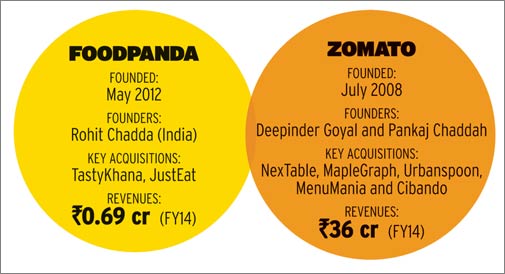 Fast forward to 2015 and things have changed quite a bit. On paper, Zomato is still leagues ahead of everyone else in the food space but online food delivery company Foodpanda has picked up enormous funding and is on an acquisitive and marketing binge, making comparisons inevitable. Foodpanda's funding is almost twice that of Zomato's - while Zomato has raised funding in excess of $163 million over multiple rounds from Vy Capital, Info Edge (India) , and Sequoia Capital, Foodpanda has more than $310 million in funding.

Foodpanda acquired JustEat in February. The company has also picked up rivals in Russia, Mexico, Brazil, Europe, West Asia and other parts of Asia. Apart from JustEat, Foodpanda has acquired TastyKhana in India.

Zomato has been on an acquisition binge too - it has acquired nine companies in nine months. Thus far happy being a discovery app, Zomato has its eyes firmly set on the food delivery market. That sets up a direct clash with Foodpanda, which is headquartered in Germany and is backed by e-commerce incubator Rocket Internet. Foodpanda, with its deep pockets, is unlikely to vacate its spot anytime soon - this race for eyeballs, the mind and the stomach of a billion Indians has all the right ingredients to make a perfect garam masala.

It is a huge market. According to the National Restaurant Association of India, the overall size of the food services market was $13 billion in 2013 and this is likely to grow to $78 billion by 2018. Although estimates vary, the home food delivery market hovers around $10 billion today. And food delivery is poised to become even bigger. "Delivery is very important for lunches. And people don't want to travel much these days," says Manu Chandra, Executive Chef and Partner at The Fatty Bao in Bangalore and Monkey Bar in Bangalore and Delhi.

Zomato's online food ordering feature may be new - it rolled out the feature in Delhi NCR on April 21 with around 1,000 restaurants; Bangalore and Mumbai will follow - but that has not stopped its founders from taking potshots at Foodpanda. "We don't bother about Foodpanda. They have very low volumes," Goyal snaps, when asked about its rival.

Sanjeev Bickchandani, co-founder of Info Edge, thinks the same. "Who is getting the traffic is very important," he says. "Then comes execution and fulfilment. The guy with the most traffic will win. Zomato has the traffic."

Zomato's frantic bout of inorganic activity has ensured its presence in 22 countries. Nearly, 400,000 people in India visit the company's app and website everyday; globally, it is three million. It has 60,000 restaurants listed in India. Although relatively small in India at the moment - Foodpanda has 12,000 restaurants listed and an average of 150,000 daily unique visitors - globally, it is a large player. Foodpanda is a much younger company; it was founded in 2012 but now operates in 40 countries.

Does Rohit Chadda, co-founder and MD of Foodpanda India, agree Zomato has the lead with all its current traffic? "I don't think so," Chadda retorts. "All the restaurants they (Zomato) have do not deliver. While it still might be more than us, it doesn't effect things too much. Because it is not about having all restaurants. We prefer to keep quality restaurants," he adds. In the food delivery business, time to delivery is critical. And Foodpanda regularly weeds out restaurants that dont deliver on time.

Foodpanda is now taking the battle to the next level. Almost coinciding with Zomato's food delivery feature launch was Foodpanda's announcement to launch its own delivery services in India - in the current model, Foodpanda took orders and passed it on to restaurants who managed their own delivery. This will change with the company investing in its own logistics network. This will help Foodpanda widen the market by tapping into restaurants that can't deliver at the moment.

"Although the service is recently launched, we have already clocked 20 per cent orders and are hoping to escalate this figure to 60-70 per cent by next year," Saurabh Kochhar, CEO of Foodpanda, noted in a statement. This service is available in Hyderabad, Delhi, Mumbai, Pune and Bangalore.

The guy with the most traffic will win. Zomato has the traffic.

Zomato does not have its own delivery network and is not considering delivery logistics right now. It is innovating in other ways. On April 23, it said it has integrated an Uber button on its app that will help users book cabs to the restaurant they wish to visit. And it has a plan ready for the delivery game - it will undercut Foodpanda in the commissioning structure. While its discovery business mostly relied on ads, food delivery is about charging a portion of the customer's bill. The founders believe Foodpanda charges way too much. "Foodpanda charges about 15 per cent on average. We don't want to do that. We will charge 7.5-10 per cent," says Goyal and adds, "This is not our core business. So we can go cheaper. This gives us incremental revenues and more satisfied customers." Foodpanda did not disclose the commission it charges restaurants; Chadda says he has not seen any undercutting war just as yet.

It is a matter of time since Zomato's appetite doesn't appear satiated. There is a poster in the company's Gurgaon headquarters where the tech team sits. "F*** Mediocrity" it cries out. And the office is replete with coffee mugs that say "Zomato 1% done". "What we have achieved is only a 100th of what we want to achieve," co-founder Pankaj Chaddah explains. That appears like a very aggressive warning to rivals.