Industry observers feel it would take a lot of effort for Wockhardt to regain its glory and it won't be easy considering the company's business mix, strategies and product portfolio.

Wockhardt MD Murtaza Khorakiwala says: 'Our fundamentals remain strong, basic business strategy is the same and we have a diverse portfolio of high-value products in the pipeline'. (Photo: Rachit Goswami/BT Photo)

In the summer of 2013, Wockhardt Chairman Habil Khorakiwala had finally begun to breathe easy after five years of losses, asset sales, court cases and corporate-debt restructuring. During an interaction at Wockhardt Towers, the generic drugmaker's headquarters at Bandra Kurla Complex in Mumbai, Khorakiwala had said with the trademark smile that the company could well be on its path to recovery. "Such a crisis happens to organisations rarely. Probably once in a lifetime," he had said. The company had posted profits after six consecutive quarters of losses. And, from a predominantly Europe-centric business, it had just started shifting its focus to the world's largest drug market, the US.

Within weeks of the interview, in May 2013, the US Food and Drug Administration (FDA) imposed a ban on Wockhardt's plant at Waluj near Aurangabad. Barely five months later, in November, the US drug regulator banned exports from the company's L-1 Chikalthana plant. The double whammy was enough to derail Wockhardts plans.

Over the past two years things have not changed much. Wockhardt has been struggling to comply with the FDA requirements and revive its US business. It has failed to plug loopholes in its processes, systems, management and people. On April 28, Wockhardt voluntarily recalled from the US the remaining batches of about a dozen products made at the two plants prior to the FDA bans. "The recall is to speed up addressing the FDA concerns. Revenues from these are not significant," says Khorakiwala.

Still, the company remains confident of a turnaround. "Our fundamentals remain strong, basic business strategy is the same and we have a diverse portfolio of differentiated high-value products in the pipeline," says Murtaza, the Managing Director of Wockhardt and son of Habil Khorakiwala. The 42-year-old admits it may not be possible to regain all lost business, but says the drugmaker will be back on track once the FDA gives the clearances.

But industry observers feel it would take a lot of effort for Wockhardt to regain its glory and it won't be easy considering the company's business mix, strategies and product portfolio.

Between 2008/09 and 2010/11, Wockhardt piled up debts of over Rs 3,200 crore and posted losses for three years in a row. Despite that, Habil Khorakiwala was relying on the company's research and development efforts of eight to 10 years and a strategic shift in business focus to script a turnaround. To back his revival plans, Khorakiwala increased R&D investments from 3.9 per cent of sales in 2008 to more than five per cent in 2012, at a time when the global economic crisis had prompted businesses across sectors to cut costs. In fact, the company opened two R&D centres in the UK, apart from the existing units in India, taking the total number of researchers and scientists to more than 580 at the time.

In 2005, Wockhardt started work on expanding its business across continents and, unlike most of its peers, decided to concentrate on Europe. The company went on an acquisition spree in Europe and, by 2010, half of its revenues came from its overseas businesses. However, Khorakiwala soon realised that only a few markets, such as the UK and Ireland, were stable and generics lacked growth opportunities in most other European markets.

Wockhardt then shifted focus to the US and aggressively funded its expansion drive even during the financial crisis. It filed 23 abbreviated new drug applications (ANDAs) with the FDA - the highest among all generic Indian companies in 2008. It launched six drugs in the US in 2011/12 and eight more in the first half of 2012/13. Among them, Wockhardt's LEC (generic of Novartis's Parkinson's drug Stalevo), the first authorised generic, contributed a great deal to its revenues, followed by Entacapone (copy of another Parkinson's drug Comtan).

Subsequently, the company's revenues soared and its business mix changed. Wockhardt's US business contributed 41 per cent to its revenues with growth of 78 per cent in 2011/12. In the first half of the following financial year, US revenues of Rs 1,081 crore stood at almost 48 per cent of its global revenues. Wockhardt's flagship product in the US, the generic for high blood pressure drug Toprol XL, gained 21 per cent market share and generated a revenue of $140 million. Wockhardt realised its potential and earned $500 million from the US in 2012, up from $100 million three years ago.

Analysts who track the US market had predicted that Wockhardt will have a compounded annual growth of 21 per cent in the US between 2012 and 2014. An Emkay research report of November 5, 2012, had observed that the company would generate $120 million in 2013 and $108 million in 2014 from the US on the back of its niche products and first-to-file (FTF) opportunities (according to US laws, the first generic company to get approval enjoys six months of exclusive sales from the date of patent expiry).

The analysts were expecting Wockhardt to gain from the sale of Metaprolol (cardiovascular drug), Divalproex (anti-seizure drug), Flonase (spray for lung-related allergies) and a slew of FTF opportunities with Stalevo, Comtan and Lunesta (anti depressants), besides Toprol and its variants. 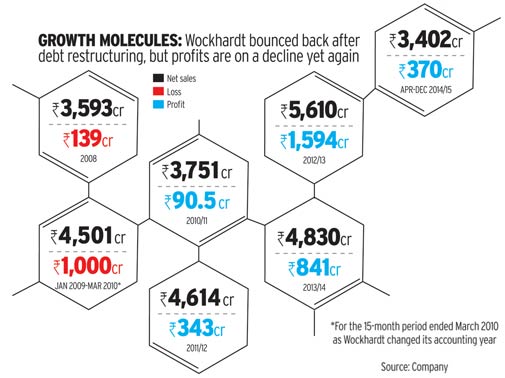 Things were just beginning to look good for Wockhardt when the FDA banned imports from the Waluj and Chikalthana plants. Analysts say while the first plant contributed around Rs 550 crore to its turnover, the second accounted for around Rs 1,430 crore. The ban covered the generic version of heart pill Metoprolol XR, which was expected to bring in a windfall for Wockhardt. "We had assumed a $100 million impact on the top line and five per cent impact on EBITDA margins for 2013/14 following US FDA issues regarding the Waluj plant," say Emkay Global analysts Deepak Malik and Krishnanath Munde.

Q&A:Drug recall is to speed up the regulatory compliance process, says Habil Khorakiwala

Wockhardt has been putting checks and balances in place to make the plants FDA compliant. Data processes have been computerised and a dozen experts in quality control and operations have been employed at the Indian factories. Wockhardt has also tied up with consultants, including Lachman and StepChange, to reorganise the systems. Besides, extensive training has been given to staff in manufacturing and quality control.

These actions might have helped Wockhardt gain some ground. "Our three plants are ready and we hope regulatory issues with Waluj and Chikalthana plants will be resolved during the next financial year and we will be able to start commercial production," says Murtaza. "We have lost some opportunities, businesses and it is not easy to regain that lost market share," he says, adding that the company might turn around in a couple of years.

The company can get the recalled products made by third-party vendors, but that process is time consuming. The next two to three quarters will be crucial and Murtaza expects things to get resolved by 2016/17. Now that the Chikalthana plant has the approval from the UK regulator (UKMHRA), Murtaza hopes there will be positive feedback from the US as well. The Chikalthana facility was inspected by the FDA a couple of months ago and the Waluj facility one-and-a-half years ago. The FDA has yet to inspect the new Shrenda plant in Aurangabad, which is going to be pivotal to its US ambitions. The US-based Morton Grove facility, which was also under the scanner, also got a reprieve after a recent inspection by FDA officials.

Analysts say Wockhardt's future is bright if it can address the FDA issues. The company is also expected to gain a great deal once blockbuster drugs such as Abilify, Nexium and Namenda lose patent protection in the US. The company has more than 60 ANDAs, or marketing applications, pending with the FDA.

Apart from the US, Wockhardt's other main markets are also doing reasonably well. While the Irish business declined by 10 per cent, the UK business has grown to 109 million pounds from 80 million pounds a year earlier. Its emerging markets business, including India, is also growing. For the nine months ended December 2014, growth was pegged at 17 per cent.

"Biosimilars, or reverse-engineered versions of biotech drugs, are going to be a major revenue earner for Wockhardt," says Murtaza. Diabetes is a major vertical for the company and it is armed with its own insulin, glargine, and delivery devices. Anti-infectives is another area the company is hoping to gain from.

The company's financial position is strong, too. Its net debt-to-equity ratio is at 0.18 per cent, helped by sale of some assets. It had a cash balance of about Rs 1,000 crore at the end of the third quarter of 2014/15. The company has over 2,100 patent filings and 21 patents have already been granted. Its R&D spend increased in 2014/15 to about 10 per cent of sales.

"The future will depend on how well we invest in research and identify the right kind of opportunity. That is what we will continue to do," says Habil Khorakiwala.

But has Wockhardt done enough to regain the FDA's confidence? "I don't want to name any company, but it is important to maintain the trust of the regulators. One cannot bring drugs to the US compromising on the quality standards we prescribe," Howard Sklamberg, the FDA Deputy Commissioner for Global Regulatory Operations and Policy told Business Today.

If Khorakiwala and his son pass that test Wockhardt may well be on the path to regain its past glory.