In the long term we are all dead, said John Maynard Keynes. But winner fund managers prove that money can be made in the long term.

A trust that pools the savings of a number of investors sharing a common financial goal: that is the simple definition of a mutual fund. And those who manage these funds know money is made only in the long term.

Does that contradict economist John Maynard Keynes who said: "The long run is a misleading guide to current affairs. In the long run we are all dead"? Take the case of Reliance Growth Fund, an open-ended equity fund where investments grew 46 times in 15 years. Sunil Singhania, Head of Equities at Reliance Mutual, advocates long-term investing as a key to wealth creation.

What does one do when the external environment is choppy? Stay put and not get swayed by fear or greed, says Singhania, winner of Best Fund Manager award under Equity India category.

Take the great fall of 2008. From its peak of 21,206.77 in January 2008, the Sensex tanked to 8,000 levels by October. There was wholesale withdrawal of funds and mutual funds were no exception. But those who stayed put ultimately benefitted. Indeed fund managers believe that such slumps should not be seen as threats, but as opportunities. In the long run, prices come to where they deserve to be: Prashant Jain, Chief Investment Officer, HDFC MF

"Every sharp fall is an opportunity to pick up quality stocks," says Singhania. The key to successful investing is picking the right stocks and ensuring they continue to add value. The secret of beating the markets, says Chirag Setalvad, Senior Fund Manager at HDFC Mutual fund, is: "Stay within acceptable risk levels and invest in quality companies." Setalvad is winner of Best Fund Manager award under Mixed Asset INR Balanced category.

HDFC MF's Prashant Jain, winner of Best Fund Manager award under Mixed Asset INR Aggressive category, is an advocate of long-term investing as well. Markets can move away from fundamentals in the short-to-medium term. "But in the long run, prices come to where they deserve to be," says Jain. Hot and volatile sectors should either be avoided or their stock movements watched very closely. In the bull run of 2007, for instance, Jain did not venture into realty, power utilities or select non-banking financial service companies. But neither did he panic during the downturn. "We did not go in cash when the markets bottomed out," he says. His fund stayed fully invested when the Sensex dropped sharply. 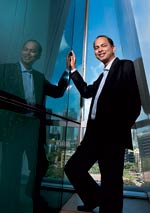 Every sharp fall is an opportunity to pick up quality stocks: Sunil Singhania, Head of Equities, Reliance Mutual Fund

Life is simpler for a balanced fund manager than it is for those of pure equity or debt funds. A balanced fund has a cushion with its equity-debt blend, which others do not. A hike in interest rate by one per cent will have a five per cent impact on the portfolio, says Jain. During the 2008 crisis, even government securities showed four to five per cent intraday volatility.

"That was a cumulative of two years' volatility with the entire capital at risk," recalls Abhishek Bisen, Fund Manager at Kotak Mutual Fund, who won the Best Fund Manager award under the Bond Indian Rupee category along with Deepak Agrawal.

For bond funds, explains Agrawal, the fund size increases with a decline in interest rates and maintaining liquidity during such a situation is critical. For Kotak Bond Fund, the split between corporate bonds and government securities is 50:50. In the aftermath of the crisis, the fund opted to buy corporate and public sector bonds with a residual maturity of five and 10 years, respectively.

"Government securities add alpha while corporate bonds contribute to accrual," says Agrawal. Alpha refers to returns adjusted for risk. The last few years have also blown the old hypothesis that there is low degree of correlation between asset classes. "We have to deal with linkages of asset classes," says Amandeep Singh Chopra, Head of Fixed Income at UTI Mutual Fund and winner of Best Fund Manager award under the Mixed Asset INR Conservative category. "The job of a fund manager is to beat the markets," sums up Jain of HDFC MF. And that comes from the long term.
Get latest news & live updates on the go on your phone with our News App. Download The Business Today news app on your device