In early June, employees at the Gurgaon office of Huawei Technologies had a good laugh over a joke doing the rounds on the social media. U.S. President Donald Trump, who has practically banned the Chinese telecommunications equipment maker from doing any business in that country on security grounds, was on a state visit to the UK where British mobile operator EE recently launched the country's first 5G services running on Huawei equipment. Trump could be using Huawei, after all.

What is pulling down the $107.4 billion company? The U.S. intelligence agency CIA has reportedly accused Huawei of receiving funding from China's National Security Commission, the People's Liberation Army (China's military) and a third branch of the state intelligence network. In fact, Huawei has been a suspect for more than a decade, and several countries have accused it of working as a spy agency for the Chinese government. This is because of Huawei founder Ren Zhengfei's deep connections with the Communist Party of China and his stint as an engineer in the People's Liberation Army.

The company's image took another hit in recent months after it was accused of IP rights theft and violation of major international sanctions. The U.S. government is particularly suspicious of Chinese brands such as Huawei and ZTE, but Huawei feels the heat more than anyone else as ZTE does not have a significant global presence in the telecom equipment space.

However, it is business as usual at Huawei's India office despite global bans on its products by several countries, including the US, Australia, New Zealand and Japan, in recent months. The company's top management in India sounds a bit guarded, though, making sure that local communications are always in sync with its global headquarters in Shenzhen.

So far, Huawei has not faced any regulatory or trade issues in India. The Department of Telecommunications (DoT) has not openly taken any stand against Huawei, but operators are waiting for clarity from the government ahead of the 5G trials beginning in about 100 days, followed by spectrum auctions by September-October. Ravi Shankar Prasad, Minister for Telecommunications in Modi government, recently said that the Huawei issue must be looked at through the prism of both technology and security. 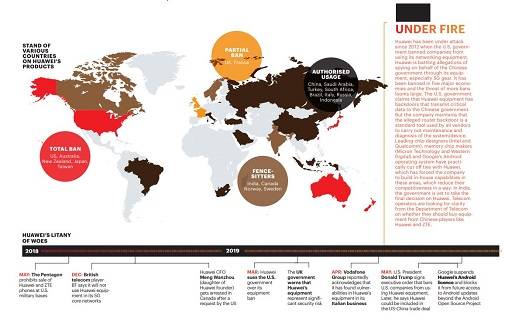 The run-up to 5G trials is going to be extremely crucial for Huawei in India and also from a global standpoint. At home, telcos such as Bharti Airtel, Vodafone Idea and Reliance Jio are preparing for 5G trials in the globally recognised 3,300-3,600 MHz spectrum band. Both Bharti Airtel and Vodafone Idea are using Huawei equipment for 4G services, and recently, Vodafone Idea CEO Balesh Sharma said the company would use both Huawei and Ericsson equipment for 5G trials. Huawei is also in talks with Jio, which mostly depends on Samsung for its 4G gear, but it is looking to diversify now.

Although telecom operators in India are open to using Huawei's gear, they want DoT to act quickly and come out with clear instructions. Until now, Indian operators have assumed that 'no-ban' indicates an tacit approval as long as the Chinese firm is authorised to do business in India. But DoT's fence-sitting has made them uneasy as the telcos are looking at multibillion-dollar investments in 5G. According to the Telecom Regulatory Authority of India (TRAI), the total investment in 5G is likely to be $60-70 billion. Huawei India CEO Jay Chen says he has held discussions with DoT over the past six-eight months and answered all its queries regarding security and other areas. "I believe any decision, based on a level playing field, policy, standards and procedures, will benefit the industry and the country," he told Business Today on the sidelines of an industry event. Besides his direct involvement in the talks with DoT officials, he has been taking part in the discussions between DoT and other Indian telcos. A formal meeting between Chen and Business Today is pending for more than three months, but it has not happened yet as the company is cautious about making any comment that might affect its India business.

The company, however, maintains it should be included in 5G trials because 5G is more secure than previous technologies due to its in-built security features, unlike earlier technologies which had add-on security features. Moreover, 5G has a 256-bit security algorithm that makes it unbreakable even for future quantum computers.

Sources in DoT say the department is evaluating Huawei's situation from different angles. "It involves technology, security and diplomatic relations. The India-US relations have hit a rough patch, and that must be taken into consideration as well," says a DoT official who does not want to be named. 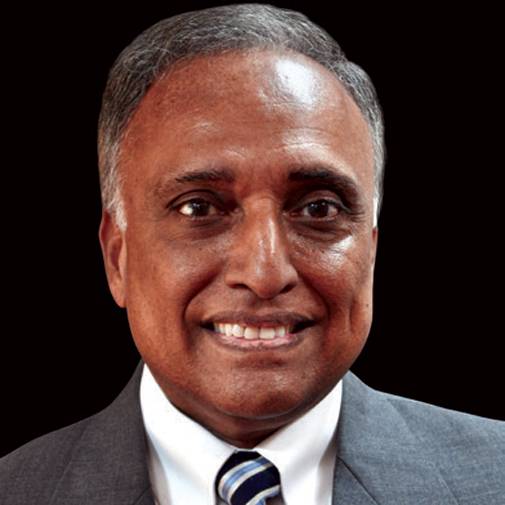 Rajan S. Mathews, Director General of the Cellular Operators Association of India (COAI) - an industry lobby representing the telcos - says in case of a security issue somewhere, government should inform all parties concerned as it has the wherewithal to track security lapses. "We have been pressing the government to act quickly as telcos must get on with upgrading their networks and buying equipment. The deeper they get into it, the more difficult it will be for them to exit at a later stage. For instance, the telecom minister should state whether Huawei should be included or not. If the government is not saying anything, it means Huawei is permitted (to operate)," he says.

Indian telcos seem to be wary of purchasing Huawei's large-ticket equipment, at least for the time being, keeping in mind the financial risks. According to Mahesh Uppal, Director at NCR-based consultancy firm ComFirst, DoT is not likely to take security issues lightly. "Security has always been a key concern. I think the government will be reluctant to take a hasty decision in this case, given the significant involvement of Huawei in the telecom sector." Uppal cites the incident of BlackBerry, which was hauled up in 2012/13 and made to share the encryption keys in a matter of national security. "Eventually, BlackBerry had to relent. I am also aware that the Telecom Engineering Centre, responsible for certification and standardisation of equipment, is trying to tighten the rules concerning telecom equipment. Having said that, it is not possible to test every device and ensure its safety, given the scale of equipment in use," he adds.

Before we look at how the Chinese giant is faring in India, a deep dive into the fast-spreading global ban may put things into perspective. The U.S. government has come down heavily on Huawei after its last round of trade negotiations with China hit an impasse. In mid-May, President Trump issued an executive order, indirectly targeting the company. The order forbids American firms from using technology developed by businesses controlled by undefined 'foreign adversaries'. But the implications are quite specific as the US has long accused Huawei of using its 5G broadband network to spy on behalf of the Chinese government.

Meanwhile, the U.S. Commerce Department has placed Huawei and its 70 affiliates on the Entity List that bars 'listed' companies from buying parts and components from U.S. manufacturers without government's approval. Entity List mostly includes companies against whom there is no evidence of wrongdoing while the Denied Persons List (DPL) features those against whom there is evidence and trade dealings can be stopped. ZTE was in the DPL category because it did business with some sanctioned countries but it was removed from the list last year.

Huawei claims that the US has not provided any evidence until now and has challenged its Entity List status in a U.S. court in addition to an earlier appeal against house arrest of the company's CFO Meng Wanzhou in Canada.

"It is largely arm-twisting. The 5G contracts are now getting signed and deployed, and the U.S. campaign can spoil their chances. What seems to be a Huawei-US fight right now may escalate into a two-nation trade war where China can impose similar bans on Apple in retaliation," an industry expert says. In brief, more than security concerns, Huawei's growing dominance in consumer and telecom segments seems to have made several developed countries uneasy. And its future in India depends on DoT's decision to include it in the 5G ecosystem. For a government trying to establish India as a global 5G leader, it is important to act sooner rather than later.

In spite of growing concerns across the globe, Huawei has not swept the Indian telecom market yet. It accounts for around 20 per cent of the wireless equipment business and supplies base transceiver stations (BTS), antennas, routers, microwave backhaul equipment and sundry components. Ericsson and Nokia rule the bulk of the market.

Its low market share is primarily due to the late entry into the Indian market. It started here in 1999 through an R&D centre, made a foray into the wireless segment in 2004 through CDMA and later switched to GSM. The company won its first contract from state-run BSNL and MTNL, followed by orders from private players. During the 2G and 3G phases, Huawei did not go head-to-head with the big boys such as Ericsson, Lucent, Nokia and Siemens. Instead, it ventured into price-sensitive markets, including Southeast Asia, Latin America and Africa, where affordability was the key to expansion. Its impact was not immediately felt, and just about 10 years ago, Huawei was considered an also-ran.

"It played in niche segments and kept on building expertise. In 4G, the company developed its credibility, and its big story has emerged in 5G. It is believed to be at least two years ahead of rivals in 5G tech. One of Huawei's USPs is equipment financing as telecom gear cost a lot. It has already financed 2G and 4G gear in India. You never know when Huawei will come out with an indemnification offer attached to its products," an industry expert says.

Today, Huawei claims it is bigger than Ericsson and Nokia combined (globally) in terms of revenue. The company claims to have won 70 commercial contracts in 5G all over the globe and the latest deal was signed with the Russian telco MTS. At the end of May 2019, it shipped 1 lakh BTS and also introduced massive MIMO (a 4.5G technology) to Vodafone Idea and Airtel to enhance their network capacity and bandwidth.

Despite its steady growth, Huawei is not a familiar name to an average Indian, neither does it feature among the top five handset sellers in the country as per IDC data. But of late, the handset business is seeing more traction. Last year, the segment witnessed the fastest growth (250 per cent) in India compared to enterprise segment's 60 per cent growth, while the telecom equipment market was nearly flat. On the enterprise side, Huawei India competes with giants like Cisco.

"In the enterprise segment, the growth has been tremendous. We are expanding partners and setting up training centres. We do not sell directly and reach our customers via system integrators, channel partners and retailers," a Huawei India spokesperson says.

It does not disclose country-specific numbers but claims there has been no negative impact on its India business yet. But globally, there is trouble brewing as major U.S. companies have cut off their ties with Huawei.

Anticipating such bans, Huawei has been developing in-house capabilities in these areas for a long time. But from a consumers' perspective, moving from Google's Android OS to Huawei OS requires a tremendous behavioural shift and most consumers are probably not ready for it.

Experts blame the US for double standards. At one point, Intel was accused of giving backdoor access to its networks to the U.S. law enforcement agencies (LEAs). AT&T also had backdoors for LEAs and the U.S. courts considered those legal.

"Besides, some backdoors are there for legitimate purposes such as carrying out maintenance and diagnosis," says COAI's Mathews and adds that nearly 80 per cent of the attacks on telecom networks involve humans. "The human factor is more dangerous than any other stuff."