Virtual Reality has existed for decades, but there's a new sense of enthusiasm among tech giants promising a veritable new world.

SAMSUNG GEAR VR: The headset, created by Samsung and Oculus is a low-cost alternative to virtual reality headsets, and will be available for purchase this November.

The 10-year-old always shared his excitement on the latest acquisitions - how he had zoomed past the hairpin turns on a racing car, the fighter jets he had flown, the AK47s and heavy artilleries he had fired, the hidden treasures he had discovered and how he had gone over the cliff risking his life. The gap between the real and virtual world, however, had a clear demarcation -the real life separated by a computer screen, and not quite cut off from or unaware of one's surroundings: "This is just for fun. I would not get to do it for real!" he would giggle, the excitement very evident in his voice.

But what happens when one crosses over to an as-good-as-real world without the demarcation between the real and the make-believe? Well, if the recent excitement around virtual reality (VR) is anything to go by, it's the stuff of legend. And, kids and adults, alike, are eagerly awaiting the 2015-end/2016 launches of VR products to experience it firsthand.

VR, in some form or the other, had existed for over half a century, always promising, yet far from the magic realism it was synonymous with right from its inception. Central to the recent resurgence of VR, however, was a 19-year-old college dropout, working with a tiny team at his parent's garage to give shape to the Oculus Rift. Between the summer of 2012 and March 2014, the road travelled by California-based Palmer Freeman Luckey was as exciting as making the virtual a reality - after initially raising $2.5million through crowdfunding via the Kickstarter platform for Oculus VR, the company he had set up, Luckey sold the yet-to-be commercially launched product for a whopping $2 billion to Facebook. It will be launched in the first quarter of 2016.

WHAT IS VIRTUAL REALITY?

"The definition of VR comes, naturally, from the definitions for both 'virtual' and 'reality'," says the website vrs. org

The Oculus Rift is a head mounted display (HMD), looking somewhat like skiing or scuba diving goggles and consisting of a screen lit by LEDs, a camera, a computer and headphones. Once the HMD is put on, it transports the viewer into an amazingly realistic virtual world - but what happens subsequently is strictly within the mind. Its genius lies in the fact that, while highly sophisticated equipment was known to create such effects, Luckey did so with far less money. The device is expected to sell for around $500.

The excitement does not stop there for geeks because Facebook is not alone in betting on the new wave of VR. Samsung, Sony and Google are now all eyeing a slice of the pie, not to forget Microsoft, which has thrown its hat in the ring with HoloLens that focuses on augmented reality. And, all of them are planning for a 2015-end or 2016 launch. 'Everyone is going wild over Facebook buying Oculus. There are still many problems to be resolved before VR becomes a mainstream activity,' says Jon Peddie, President, Jon Peddie Research.

Sony is working on Project Morpheus, a VR HMD for its PlaySta-tion 4. Samsung is developing a new HMD powered by Oculus VR, which will provide exclusive content, especially movies and games. So is HTC, whose Vive will be powered by an Oculus rival, SteamVR, and get content from HBO, Lions Gate Entertainment and Cloudhead Games among others. Microsoft is developing its own HMD for Hololens, a holographic computer. Google has stolen a march over them all by already releasing a VR platform called Cardboard, which one can assemble on their own, and a smartphone that takes the place of a computer. The Cardboard kit - available in India for less than Rs 350 - comprises a piece of cardboard, lenses, magnets and near-field communication (NFC) tags, with complete instructions on how to assemble it.

Some say Oculus is currently the industry leader and has set the bar very high, followed by Sony's Morpheus and HTC Vive, and though it's augmented reality, HoloLens will also be a big player. The race does not stop there either, as many start-up accelerators are expected to come up with their own versions. 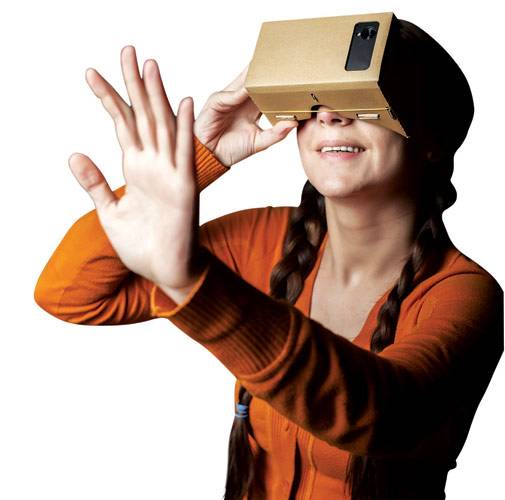 CROSSING OVER: First, you need a viewer. The most convenient is perhaps Google's Cardboard, available at most online stores at affordable prices. Cardboard, lenses, magnets, etc, are provided in the package, but you need to do the assembling yourself. Next, download the VR apps on your mobile and place the mobile on the convenient base Cardboard provides. Wear the viewer and you are ready to go.

Now, consulting firm KZero, which specialises in the virtual space, estimates the VR industry - hardware and software included - will be worth $5.2 billion by 2018. Research firm Digi Capital maintains that VR, along with its allied Augmented Reality industry, could be worth $150 billion by 2020.

The growing influence of VR can be seen from the fact that some companies are turning to VR product launches. "We originally planned a traditional launch (for OnePlus 2 smartphone) on a stage in San Francisco," says Vikas Agarwal, General Manager, India OnePlus. "But it felt a bit too formal and allowed us to reach a very small segment. We have users all over the world and VR offered us an affordable means to reach out to viewers in 35 countries."

The road to VR began as early as 1957 with the Sensorama in which the viewer entered a special booth where he could experience 3D images, along with accompanying sounds and smells and even the rush of wind. The first HMD with a head tracking system was developed by Philco Corporation in 1961. In the 1980s and 1990s there were major advances, as films like Tron and The Matrix show, but, thereafter, the genre had withered until the recent spate of activity.

The earlier phases focused entirely on entertainment and gaming. Now, the advent of smartphones is expected to drive its future. "The mobile market for HMDs can be divided into two categories, integrated displays and smartphones," says Jon Peddie, President, Jon Peddie Research. "I expect smartphone HMDs to outsell the integrated ones by 20 times, because of the price difference and low risk." Jonathan Tustain, co-founder of UK-based FreeFly VR, which makes VR headsets, agrees. "As mobile phone companies look for the next killer app, they will offer VR as one of their features," he says.

To ride the wave, the entire technology industry is investing in hardware and software, as well as in research for applications across various industries. Healthcare is a sector where VR's potential is already being put to use in robotic surgery, skills training and therapies. The platform, HumanSim, for example, allows doctors, nurses and other medical personnel to interact with one another for training scenarios. It is an immersive experience which measures the participant's emotions via a series of sensors. Psious, on the other hand, is an online VR tool for therapists to treat phobia.

Education is yet another area, with EON Reality, for instance, offering Virtual 3D learning solutions - instead of diagrams, for one, it provides interactive videos which are easy to understand. The technology is being used at Carnegie Mellon University (US), Imperial College (UK), Nanyang Technological University (Singapore) and elsewhere.

The possibilities are immense, even in the Indian context. "The interest in VR at the consumer education level is fairly recent," says Neeraj Jewalkar, founder and CEO at Smartur.com. "Many experimental applications have been built to use VR in education. Most of them relate to visualising the human anatomy or exploring the mechanics of motors. The real penetration is going to happen in a top down format with higher education institutions adopting it for cost benefits and efficiency of learning. History will become easy to teach and learn with VR. Imagine being able to watch the Dandi March by Gandhiji in real time or see the Taj Mahal being constructed."

Real estate companies are also using VR to offer life-like property experiences to its customers. Earlier this year, CommonFloor introduced VR, allowing customers to view multiple properties while sitting at a single location. 36ty Solutions also offers a similar service. Poland-based Immersion is yet another firm which creates interactive presentations for VR headgear using computer graphic engines. The app is developed so much in detail that one can view what the landscape will be like from a particular window. Even Rewind has developed an in-house solution called Horoma, which allows people to tour real 3D scans of properties.

VR is also being used for designing products, marketing and public relations. SmartVizX, a start up in India, is using VR technology for designing products as well. "Virtual reality is the new wave," says Shailesh Goswami, founder and CEO, Foyr, an automated interior designing solution which launched its VR enabled app in August this year. "We have adopted it as we are in a high-investment category and helps in experiential selling."

Hospitality and tourism are also benefiting from VR. Qantas airline has launched an interactive VR technology for its first class customers showcasing in-flight movies and entertainment along with Qantas products and airline's destinations' network. It also offers a special 3D experience from Australia's Kakadu National Park. Marriott Hotels has started a new VR headset trial by which guest can 'see' the local sights without leaving the hotel room. Even in India, The Thought Studio in Chandigarh is working towards a VR interpretive centre at the Amer Palace, Jaipur. It is also planning a VR interpretation centre, enabling a detailed virtual tour of the Taj Mahal.

There are, however, a few who are somewhat sceptical about its prospects. Says Jonathan Tustain, co-founder of UK based FreeFly VR, which is into VR headgears: "The growth of the virtual reality industry is based on speculation at the moment. There is very little data as to how consumers will respond to virtual reality beyond the early adaptors, and most importantly, the price they are willing to pay for the content in a world that is increasingly focussed around multi-tasking. Wearing a headset takes commitment and, so, for the industry to grow beyond the initial hype, it will be imperative for VR to deliver content that fits within people's lives."

Peddie agrees: "Everyone is going wild over Facebook buying Oculus. There are still many problems to be resolved before VR becomes a mainstream activity. It's a novelty now and will remain so except for the traditional uses in science and industry. There are a lot of interesting ideas for VR, but very little actual implementation," adding: "Most importantly, are people willing to wear the HMDs and remain cut off from the actual reality for long periods? I think the answer is no. And if you have, was it a pleasant experience and for how long did you try it?"

This raises other questions as well. Is VR harmful for our eyes and ears, or our senses? Why are companies suggesting only 10-minute sessions before taking a break? Says Dr. Taru Dewan, Senior Eye Specialist at PGIMER and RML Hospital: "Using the VR headgear for long durations may cause strain and may create eye muscle fatigue and weakness. This is what is expected unless the VR systems are developed to adapt according to ocular alignment of users. It is more of a concern in children. But these effects have to be actually documented to say with certainty."