The Tata Nexon was equipped with upgraded features based on customer feedback, a leaked document showed.

All variants of Tata Nexon in petrol and diesel options, except the base XE trim, have received upgrades.

Tata Motors has updated its compact SUV Nexon with a host of features, according to a leaked document. The feature upgrade for Tata Nexon was carried out based on customer feedback. Apart from the base XE variant, all other variants of the Tata Nexon in petrol and diesel options have received new features in the latest round of upgrades.

The Tata Nexon is priced in the range of Rs 6.85 lakh to Rs 11 lakh (all prices ex-showroom Delhi). It is presently the only compact SUV in Tata Motors' portfolio, competing against Maruti Suzuki Vitara Brezza, Mahindra XUV300, Ford EcoSport, Renault Duster, and the recently unveiled Hyundai Venue.

As per the document released by Team-BHP, the XZ+ and XZA+ variants in both petrol and diesel options get additional rear power outlet (12V) behind the rear set. The door-trim colour for these variants has also been upgraded to piano black from satin chrome. 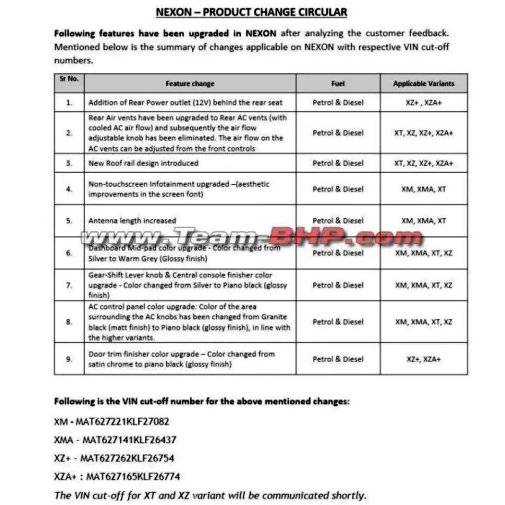 The XT, XZ, XZ+ and the XZA+ variants of the Tata Nexon have been upgraded with rear AC vents and roof rails. The XM, XMA, XT, XZ variants have received colour upgrades in dashboard, gear-shift lever knob, and the AC control panel.

For the XM, XMA and the XT variants of Tata Nexon, the non-touchscreen infotainment system has been upgraded with aesthetic changes. The antenna length has also been increased in these variants.