When you produce physical gold to the bank, it values the commodity based on its purity and as per the existing market price, and RBI-prescribed LTV, it sanctions you a loan amount

If prices fall drastically and the value of gold pledged with the bank falls below the minimum margin requirement, which is 10 per cent currently, then the bank will ask you to meet the shortfall in margin maintenance by paying the additional amount

A recent move by the Reserve Bank of India (RBI) has made loans against gold more lucrative to tide over the financial crisis. The central bank has increased the loan-to-value (LTV) limit for gold loans by banks to 90 per cent from the earlier 75 per cent. So, for the same value of gold, now you are eligible for higher amount of loan. While the move does sound positive from the borrower's point of view, it may backfire if gold prices tank drastically from the current levels. Just in last two days, the prices have fallen from Rs 56,000 per 10 grams to below Rs 50,000. So, while gold loans are indeed a good option to meet your short-term money requirement, you must know how gold loans are structured and ways of repayments to avoid future shock.

"Hiking LTV of gold loans does not bode well for consumers, because they will be right on the edge. If the gold prices fluctuate, the way they have been fluctuating, the institution may end up recalling the part payment of the loan amount from the customer end, and this may lead to unnecessary disputes and pressure. So, it will hamper the peace of mind," says Rachit Chawla, CEO & Founder, Finway. When you produce physical gold to the bank, it values the commodity based on its purity and as per the existing market price, and RBI-prescribed LTV, it sanctions you a loan amount.

If prices fall drastically and the value of gold pledged with the bank falls below the minimum margin requirement, which is 10 per cent currently, then the bank will ask you to meet the shortfall in margin maintenance by paying the additional amount. "In that case, the customer has to be very cautious, because they (banks) might end up liquidating the gold if the top-up requirement from the customer end is not fulfilled," says Chawla. So, you may have to return some loan amount sanctioned to you if prices fall from the current levels.

So, how much should you borrow that the possibility of margin payment does not arise? "The solution is to never take more than 60 per cent of the gold loan value to avoid recall of the loan amount," says Chawla.

If you are careful enough to take lower loan value against gold, gold advances are an effective way to deal with short-term financial crunch. The interest rates on these loans are much cheaper than personal loans. "Gold loan interest rates can range from 7.50 per cent to 22 per cent depending on the nature of loan, ticket size and loan provider. SBI currently has the lowest rate of 7.5 per cent on gold loan as majority of its gold loan is to priority sector agricultural advances.  NBFCs such as Manappuram Finance and Muthoot Finance have interest rate starting from 11.99 per cent to 22 per cent. Private sector banks typically offer large ticket size gold loan in the self-employed segment with rates starting at 9.90 per cent," says Shalini Gupta, Chief Strategy Officer, MyLoanCare.

Typically gold loans are extended for a period of one day to 36 months. In case of non-repayment of EMIs or the loan amount, the banks charge additional interest/penalty on the due amount. "The additional interest charged vary for each bank and NBFCs. For example, Kotak Bank charges 3 per cent of the overdue amount, which is to be compounded monthly, whereas HDFC Bank charges 2 per cent per annum over and above the applicable interest rate on the entire loan amount," says Gupta of MyLoanCare. 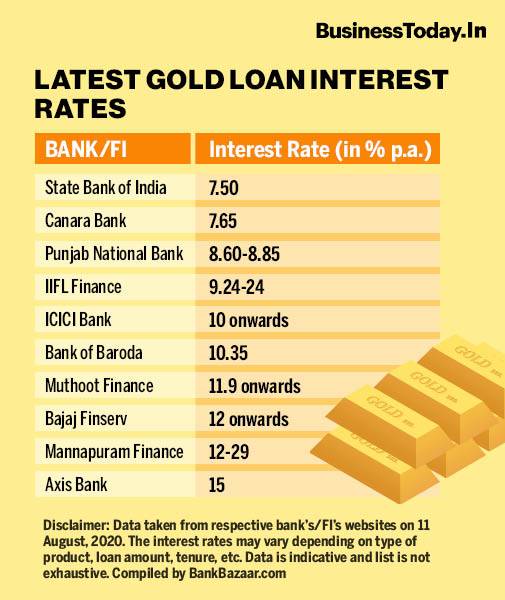 If you want to foreclose your loan, some banks and NBFCs may levy prepayment charges, while most of them do not. "SBI and Manappuram the two largest gold loan providers, do not charge prepayment fee for repaying the gold loan before tenure. However, private banks like HDFC Bank charge 2 per cent of the loan amount, if loan is closed within three months while Kotak Bank charges 2.25 per cent of the  loan amount even if prepaid one month before the end of tenure," Gupta says.

How to repay loans

Gold not accepted for loan

Most lenders prefer to lend against gold jewellery. Some of them do not accept gold bars or gold bullion for advances. Besides, the gold being pledged must be of 24 carat or at least 22 carat. "Gold considered defective by the lender, whose quality is in question or is considered spurious, is not the bonafide property of the borrower, hasn't been acquired from genuine sources, or has claims against it will not be accepted by the lender," says Adhil Shetty, CEO, Bankbazaar.com.

Loan against paper form of gold

One can also take loan against paper form of gold. So, if you hold gold ETFs, mutual funds or sovereign gold bonds, you can take loan against it. The borrowing happens through term loans or overdrafts in which gold ETF, MFs or bonds are accepted as collateral. "In case of sovereign gold bonds, one government bank says the loan tenure will be residual tenure of the bond, which matures in eight years. So if the bond was issued three years ago, your tenure would be a maximum of five years," says Shetty.

When it comes to quick disbursal of loans by banks, gold loans top the chart as these are secured loans. So, if you face a financial emergency, gold loans can help you have quick liquidity, but make sure you do not take the highest possible loan value against the physical gold considering volatile gold prices. Prefer banks and NBFCs over your neighborhood jeweller shops to pledge your gold and make a comparison in terms of interest rates, repayment options and processing and valuation fees.