The worst seems to be over for the banking sector. It may be the right time to buy bank stocks.

After being subdued for most of last year, the banking sector has gathered momentum. The S&P BSE Banking Index, a proxy for the sector's performance, has returned 26 per cent between January 16, 2016, and January 16, 2017. Banking sector funds did even better and delivered 31 per cent returns on an average; the top performers returned more than 35-40 per cent. In fact, banking funds beat all equity mutual fund categories (See Fund Performance).

Alpesh Mehta, Banking Analyst, Motilal Oswal Securities, says the third quarter of 2016/17 was important for the sector due to three defining trends - a sharp rise in current account, savings account (CASA) deposits at most banks due to demonetisation, pick-up in digitisation and massive fund flows into bond markets, which triggered a sharp drop in bond yields.

"The biggest benefit of demonetisation has been the sharp increase in the deposit base of banks," says Siddharth Purohit, Senior Equity Research Analyst, Banking, Angel Broking.

Both loan and deposit growth have been subdued for many quarters now. After demonetisation, banks are sitting on a huge pile of funds, which has enabled them to reduce interest rates on deposits and, in turn, bring down their cost of funds and increase margins. According to industry reports, almost Rs 15 lakh crore has come into the banking system as deposits after demonetisation. Nearly 30-40 per cent of this is expected to remain in the system by the end of 2016/17. This will lead to nearly 5 per cent quarter-on-quarter increase in the CASA ratio of the banking system. Purohit says banks with higher CASA ratios will gain the most, as these deposits are low-cost and will, thus, increase margins. In the last quarter, bond yields fell as much as 30 basis points, or bps, increasing the value of bonds held by banks. Interest rates and bond prices share an inverse relationship - when rates fall, demand increases for older bonds that pay a higher coupon rate. Hence, any portfolio holding these bonds goes up in value. Some banks have already indicated that they have made decent trading gains that will help them ease the stress in balance sheets. "Banks such as State Bank of India, Punjab National Bank, Canara Bank and Axis Bank are likely to be big beneficiaries," says Mehta

There are quite a few worrying signs too. Loan growth has been at multi-year lows (it was poor even before demonetisation) owing to excessive NPAs and poor demand from companies due to economic slowdown. Also, banks will have to pay interest on the new deposits, which they may not be able to deploy profitably due to low credit demand. Both these factors will impact banks' net interest margins or NIMs. Further, the Reserve Bank of India's (RBI's) directive on lower charges for cards and payments will impact fee income growth. Demonetisation, too, has hit consumption and disrupted economic growth, lowering demand for working capital loans. Also, for the past two months, the entire banking system has been busy in just accepting the rush of deposits after demonetisation, something that has hit their income.

However, most analysts say these are short-term worries. "Although the current quarter cannot be extrapolated, the benefits of demonetisation such as improved CASA ratios and low interest rates (led by low inflation) are here to stay," says Mehta. The demand for retail products such as vehicle loans, credit cards and personal loans is expected to bounce back soon, say experts.

Also, with cost of deposits falling, banks have been able to lower rates for consumers. "In spite of the 175 bps repo rate cut in the past two years, banks were not able to fully transmit the benefits to consumers. Now, with surplus liquidity, the transmission has more or less happened. This should increase credit demand to an extent," says Purohit. 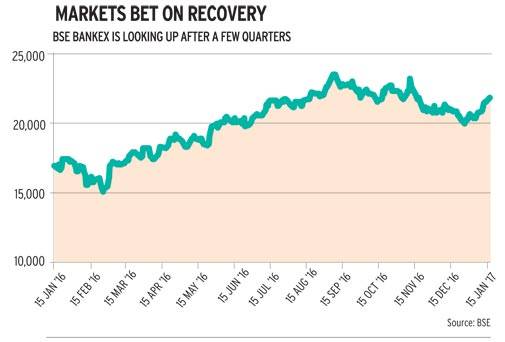 Purohit says the NPA problem is not over. According to a report by CARE Ratings, gross NPAs in September 2016 were 9.1 per cent of advances. Assuming that banks are still cleaning up their balance sheets, they would range between 9.5 per cent and 9.8 per cent in the third quarter of 2016/17 and rise to 10.1-10.4 per cent by March 2017. However, if banks follow the RBI's NPA recognition norms by March, the ratio could come down to 9.4 per cent.

Besides, while there may not be a big impact in the current quarter on NPAs due to demonetisation, there is some concern over banks that have high exposure to small and medium enterprises, which have been hit badly by the cash crunch. Some experts, however, say that the net impact may not be huge as banks recovered a lot of small-value bad loans in November and December with borrowers using old currency to pay off their debts.

Factors to watch out for

Mehta says one must be on the lookout for NPAs and see how credit growth pans out in the coming quarters. He expects sector to grow at 10-11 per cent a year. Banks such as Yes Bank, IndusInd Bank and RBL are seeing growth of more than 20 per cent.

While selecting a stock, see if the bank has control over its net interest margins and is able to maintain them over at least a few quarters. Typically, a retail bank's margins are over 4 per cent, while a corporate bank's margins are 2.5-3 per cent. Also, keep in mind that the banking sector moves hand in hand with the economy and any good news on the latter front augurs well for bank stocks. Although there has been an improvement in sentiment due to higher liquidity, the coming monetary policy and the fiscal stance announced by the government in the Budget will be the key to loan growth.

Last, but not the least, bank stocks have run up quite a bit of late and, hence, one should invest in a staggered manner. "We could see high double-digit rise in banking stocks over the next three-five years," says Mehta.