HomeCOLUMNS Story
'Section 66A of IT Act is draconian and should be scrapped'
Madabhushi Sridhar | Edition:Dec 23, 2012

The section is absolutely draconian as it gives rulers a weapon to misuse and deprive citizens of their personal liberty, says Madabhushi Sridhar, coordinator at Center for Media Law & Public Policy, NALSAR University of Law, Hyderabad. 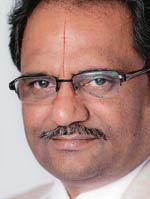 Had Shakespeare been born five centuries later and tweeted a line he wrote in Henry VI, Part 2, he could have been arrested and chargesheeted in India. Under Section 66A of the Information Technology Act, 2000, the line, "Let's kill all the lawyers", could be construed as "causing annoyance" to a class of people.

Constitutional Curbs: The founding fathers of the United States who agreed upon the First Amendment, or their counterparts in India who drafted Article 19(1)(a) of Indian Constitution never wanted to jail writers for commenting. They guaranteed freedom of speech and expression. Threat to public order, defamation, incitement to offence, contravening decency and morality, committing contempt of court, etc, are listed in Article 19(2) as grounds to limit freedom. Curbs on speech cannot go beyond this.

Unconstitutional Curbs: If the police consider a tweet or blog 'grossly offensive' or 'of menacing character', or causing 'inconvenience, annoyance, danger, obstruction or insult', they can prosecute the netizen responsible under Section 66A of the IT Act, which carries a maximum imprisonment of three years. This is certainly a breach of the fundamental right to speech. The grounds provided are not rooted in those listed in Article 19(2). This section will not be able to stand the scrutiny of the judiciary on whether it conforms to the Constitution. If an expression is not criminal when it is made in the brick-and-mortar world, it cannot become one in cyberspace. Justice Markandey Katju, Chairman, Press Council, wrote in The Hindu that the Shiv Sena policy of favouring sons of the soil would lead to balkanization of the nation. Police might think this article causes 'annoyance', 'inconvenience', or that it is 'grossly offensive' to the Shiv Sena. Would it be constitutional to prosecute him for these comments as they are also on The Hindu website?

Alternative Law: The Indian Penal Code and other provisions of the IT Act, especially after the 2008 amendment, provide enough safeguards against defamation, intentional insult leading to breaking the peace, incitement to commit offence, etc. Political criticism always causes some annoyance to someone. Ruling party and Opposition members routinely say unflattering things about each other. Should they be chargesheeted, too? The basic idea behind freedom of speech is to allow divergent critical views without looking into whether people are annoyed or inconvenienced.

Breach of Fundamental Rights: Section 66A is absolutely draconian as it gives rulers a weapon to misuse and deprive citizens of their personal liberty. Thus it not only violates Article 19(1)(a) but also Article 21, the right to life and liberty. If Section 66A is used, it will foreclose debate and discussion. Its chilling effect is already visible - the jailing of a professor in Kolkata, a businessman in Tamil Nadu and two young women in Mumbai, for casual cyber writings, or simply forwarding of received material. Today netizens are victims, but next journalists will be threatened, as most of their writings are uploaded on the Net, too. This is a potential tool in the hands of rulers to curtail the voice of opposition. It is fatal for the freedom of speech of netizens in general and the press in particular. The executive should delete it from the IT Act or refrain from using it.

(Hearing a PIL challenging the constitutional validity of Section 66A, the Supreme Court has issued notices to the Centre and five states to explain the arrests made under it.)
Get latest news & live updates on the go on your phone with our News App. Download The Business Today news app on your device
More from COLUMNS