The Finance Minister has announced a Rs 65,000 crore fertilizer subsidy to enable timely availability of fertilisers in the upcoming crop season for farmers

Finance Minister Nirmala Sitharaman on Thursday announced a Rs 65,000 crore fertilizer subsidy to enable timely availability of fertilisers in the upcoming crop season for farmers in her third set of stimulus package to boost the economy. The likely time period of the expenditure has not been specified but this is in addition to Rs 71,309 crore budgeted to be disbursed during FY21.

Data up to September shows that out of allocation, the government has spent 78 per cent or Rs 55,406 crore. Last year it was 70 per cent. "Hence the excess spent this year is around Rs 5500-6000 cr. We have assumed a maximum of Rs 30,000 crore being incurred this year as the sowing period will prevail for only another 3-4 weeks," said a CARE Ratings note. Additional fertilizer subsidy - though part may be for next year given that a large part of rabi sowing is over, it added.

Increased supply of fertilisers at subsidised rates will help 140 million farmers, the FM said. According to the Department of fertilizer dashboard around 77 million farmers have purchased subsidised fertiliser with almost a 22 per cent share coming from Uttar Pradesh. Farmers from Bihar and Maharashtra contribute another 15 per cent. 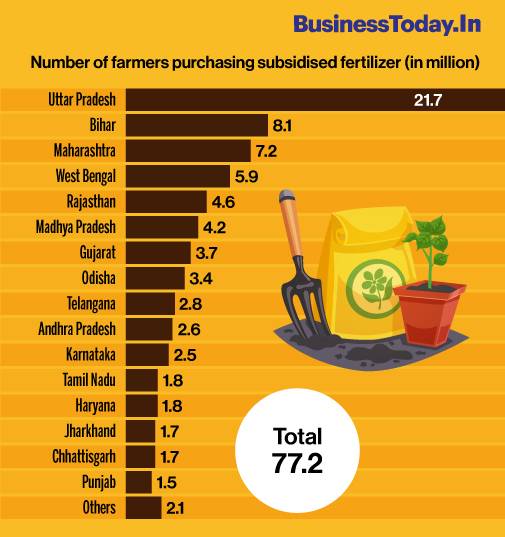 There is an estimated increase in fertiliser usage of 17.8 per cent over the actual usage in 2019-20 of 571 lakh metric tonnes. The increase is on account of favourable monsoons and the resultant increase in sown area. Fertiliser consumption which was 499 lakh MT in 2016-17 is expected to increase to 673 lakh MT in 2020-21, Nirmala Sitharaman added. According to a CARE rating report early in November, overall sales of fertilizers increased by 25.1 per cent during April'20-August'20. Sales of urea, Diammonium Phosphate (DAP) and Muriate of potash (MOP) have increased by 6.5 per cent, 28 per cent and 15.6 per cent, respectively during the first half of FY21.