Why equity financing by the government may be an important step to get India Inc. back on track

Covid-19 has taken an extraordinary toll on businesses around the world. In India, business confidence is at its lowest since the 2009 financial crisis: 72 per cent of firms have reported adverse effects on operations, 90 per cent are facing supply chain disruptions and 53 per cent anticipate a decline in sales over the next two quarters. Industrial output in key sectors could fall by up to 15 per cent and GDP growth by 10-20 per cent during the April-June 2020 quarter, with ripple effects continuing for an uncertain period of time.

The government's immediate policy priority was, rightly, to support low-income households through cash and in-kind transfers worth Rs 1.7 lakh crore, or 0.8 per cent of GDP. This is well below the fiscal packages committed by other national governments, though the amounts are bound to increase in the coming weeks. Support to businesses has been extended through monetary and macro-financial policy - the RBI has directly injected Rs 2 lakh crore through refinancing operations, given firms a three-month moratorium on loan payments and reduced interest rates across the board.

However, as one of us recently proposed in the context of Europe and Singapore, rather than offering debt financing, businesses can be better supported through the direct injection of 'quasi-equity' finance by the government. The government should offer to make direct investments in businesses by taking a 'minority stake', which will be recovered through higher taxes on profits over a number of years. By making payments conditional on profitability, rather than saddling firms with repayable debt, equity finance will be more sustainable in the long term. 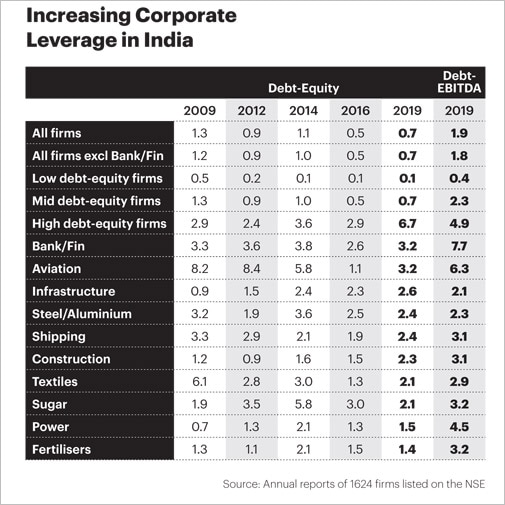 More worryingly, one in 10 bank loans is currently stressed. Total non-financial corporate debt is 44 per cent of GDP, well below emerging market economies' average of 91 per cent. But much of this debt in India is of low quality, with 45 per cent of all corporate debt held by firms with interest coverage ratios of less than one, that is, firms that are unable to service their interest obligations. The table shows median debt-equity and debt-EBITDA ratios of 1,624 firms listed on the National Stock Exchange by sector. While the median debt-equity ratio of 0.70 has improved in the last 10 years, firms in the top tercile are highly leveraged, with a median debt-equity ratio of 6.70, which is clearly unsustainable even in normal times. This represents a significant weakening of their balance sheets compared to 2016, and even compared to just after the financial crisis in 2009.

Adding to this debt during a global crisis will hurt long-term growth prospects of highly leveraged firms, which struggle to raise debt and face higher interest rates. They also suffer incentive problems associated with a large debt overhang, whereby undercapitalised firms pass on profitable investment opportunities since much of the returns will accrue to creditors. For the same reason, highly leveraged firms tend to choose riskier projects as creditors bear a higher share of risks. Studies have found that higher levels of corporate debt are associated with lower corporate investments, and highly leveraged firms cut more jobs during downturns.

For cash-strapped firms, particularly in sectors such as aviation, infrastructure, steel and aluminium, shipping and construction, equity injections are more attractive. However, an increase of only 10 per cent in total capitalisation of the highest tercile of firms alone will require about Rs 1.8 lakh crore, with the amount rising sharply if all firms are included. Returns in Indian equity markets have been negative over the last two financial years. Foreign portfolio investments have registered net outflows during the period. Raising sums of this magnitude through markets is practically impossible without severely depressing equity prices, and diluting the cash flow and control rights of shareholders. Further, accessing foreign equity capital will also raise the spectre of takeover of Indian companies by foreign investors at "cheap prices". As an alternative, we propose "quasi-equity" financing of firms by the government. The Centre should create a government special purpose vehicle (g-SPV) that will do the following:

The amount and duration of the increased tax pay-out to the g-SPV can be calculated using standard corporate finance valuation techniques. From the perspective of businesses, an increase in tax rates of 5 per cent, as in our example, over a few years, would be less onerous than borrowing working capital at high nominal rates of 12-14 per cent.

The government will have to manage risks arising from asymmetric information, specifically, adverse selection and moral hazard. Due to adverse selection, the business will know more about its true financial condition than the g-SPV does, ex ante, potentially resulting in lower-quality firms seeking equity finance. This risk can be mitigated by using information on past financial performance and routing the funding through commercial banks and state financial institutions, which possess better information about these firms. In an extreme case, the g-SPV can also introduce an 'adverse selection haircut'.

Moral hazard, on the other hand, arises when businesses siphon off funds received from the government, ex post, and use them for unauthorised purposes. The government will have to seriously deal with issues of non-compliance. Under the alternative of debt finance, too, compliance with loan conditions will be difficult to monitor, with a high risk that many loans will end up as non-performing assets. In that sense, the monitoring effort in equity financing is no different, but with the advantage that the government will participate in the upside if the economy rebounds.

With the pandemic and the consequent lockdowns, the IMF projects GDP growth of 1.9 per cent in India in FY21, before a sharp recovery to 7.4 per cent in the next year. However, without immediate financial support, many firms might not be able to survive till then. Providing firms with "quasi-equity" could be the key to a rapid and sustainable recovery.

Anisha Sharma is Assistant Professor of Economics at Ashoka University.

Marti G. Subrahmanyam is the Charles E. Merrill Professor of Economics, Finance and International Business in the Stern School of Business at New York University