Government planners had hoped the enormous Ryugyong Hotel would symbolise a resurgent North. 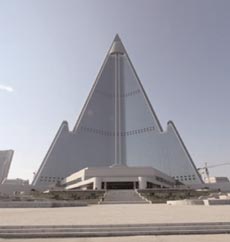 In the heart of North Korea's capital Pyongyang, a 105-storey pyramid -shaped 'hotel' has stood half-built for decades. Government planners had hoped the enormous Ryugyong Hotel would symbolise a resurgent North.

Instead its incomplete execution came to signify the serious problems plaguing the country. However, come August 2013 the hotel will get a new lease of life when it finally opens to the public as a multipurpose complex. It will offer 150 rooms on its top floors, a lobby, restaurants and a shopping centre below, and office space in between.

Cairo-based Orascom Telecom has invested $180 million to complete the building's exterior, and is currently working on the interior. Upon completion, the Kempinski group has been contracted to manage what will be the tallest hotel in North Korea.