Brand pages are proving to be the best way to monetise apps, especially in countries such as India, where in-app purchases are yet to gather steam. Almost all messaging app companies have tied up with mobile manufacturers to preload their apps on new devices.

Jun Masuda of Line Corp with some of its sticke characters Photo: Vivan Mehra/www.indiatodayimages.com

Smileys were always popular, but they never got the cult status that stickers - the new, larger emoticons - have gained. The fad, started by the Line messaging app in Japan, is now big enough to prompt TV shows featuring sticker characters in the country, and local versions of stickers in other countries. But the biggest indication that the stickers from Japan had become a global phenomenon came when Facebook adopted them, first on mobile and then on web chat.

Characters such as Cony, a cartoon rabbit, and his bear friend Brown, are more than conversation fillers when chat junkies are at a loss for words - they are good business. Line Corporation, which owns the Line messaging app, made $27 million in the second quarter of 2013 from these expressive chat icons - about 27 per cent of its $101 million revenue for the period. The app's revenue grew 66.9 per cent over the first quarter, powered by impressive growth in traditional markets such as Japan, Taiwan and Thailand. Growth in numbers - crucial to the monetisation of these apps - will depend on growth in new markets, such as India. 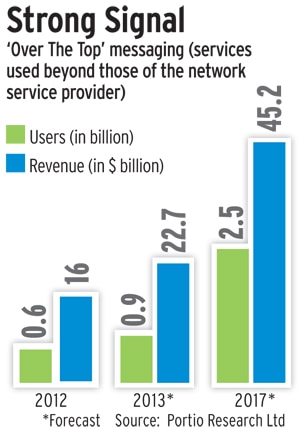 Line made a dramatic Indian debut in July, raking up five million active users in three weeks. Global Chief Marketing and Strategy Officer Jun Masuda says its success marks a transition from open social networking services to closed ones. "People are tired of social networks," he says. "You don't talk to people you don't know, so why should you contact them on social networks? Line is where you talk to people who are close to you. This format does not tire people."

The closed model is Line's USP, and in Japan it is popular among couples. This also explains why people are willing to buy stickers within the app. After all, how many would do that to impress a boss? Line users send 7 billion messages a day, including a billion stickers. They also play games within the app, buying virtual items when stuck at a hurdle. These in-game purchases account for 53 per cent of revenues this quarter. Line plans to launch video calling this fall, besides Line Music and Line Mall, in Japan. It claims a user base of 230 million.

WeChat and its Chinese version,Weixin, claim over 300 million, which, according to the GlobalWebIndex, makes WeChat the fifth most used app in the world, with presence on 27 per cent of all smartphones. This is also why WeChat, owned by Chinese Internet giant Tencent, can afford to spend big on customer acquisition outside its base in China.

WeChat is not forthcoming on revenues, but Tencent's results for the first half of 2013, announced in mid-August, show that about 76 per cent of its $4.5 billion revenues comes from value-added services. WeChat makes money through apps on the platform as well, as by letting brands create pages to reach out to their customers. In an e-mail interaction from Hong Kong, spokesperson Katie Lee was noncommittal about whether a similar model is possible in India. "The success of WeChat really boils down to social experience and value we bring to users," she says. "We are working on the business model for international markets."

Monetising Tricks
Brand pages are proving to be the best way to monetise these apps, especially in countries such as India, where in-app purchases are yet to gather steam. "Companies want to use our huge user base for promotions," says Masuda."Stickers from companies can be free for users, but companies will have to pay Line for putting it online." He cites the examples of Hollywood studios, which create sticker sets to promote movies such as Iron Man 3 and Monster University. In India, Sony was among the first to open an account on Line.

BlackBerry, too, has jumped on to the bandwagon. It is all set to take its popular BlackBerry Messenger (BBM) to the Android and iOS operating systems, and is testing its BBM Channels service, which will allow brands and content providers to maintain a page to post messages and video for their audiences. "They can see who is visiting the page and engage with them," says Annie Mathew, Director, Business Development and Alliances, BlackBerry India. "This also lets them create targeted and location-based advertising." BBM has 61 million users globally, and traffic exceeds 10 billion messages a day.

The Indian market has its own demands. So while Line rolls out Indian stickers and support for local languages, WeChat's money is on emoticons of Indian celebrities such as Parineeti Chopra and Varun Dhawan, as well as a tie-ups with Bollywood production houses. With a Dabangg Salman Khan and a cigarette-flipping Rajinikanth on its sticker list, BhartiSoftBank's Hike seems to have the home advantage. "We wanted to find a solution for fragmentation, so that people would not have to use multiple apps," says Kavin Bharti Mittal, Head of Product and Strategy at BhartiSoftBank (BSB), a joint venture between the Bharti Group and Internet company SoftBank. "That is why we started with a Hike-to-SMS feature, which is a very powerful feature in India. This is now about 30 per cent of the one billion messages we do a month." Hike users can message even offline contacts. Mittal says this is needed, as 70 per cent of Hike users are based in India, where there is a "tendency to switch off data services often".

Launch Pad
Though Hike is not yet monetised, Mittal sees it as a large distribution platform on which he can promote the other BSB verticals, such as gaming and coupons. "It is important for a company like ours not to focus on revenue too early. You need to have the right product and business strategy first. Our focus is on getting to 10 million first."

To achieve this, almost all messaging app companies have tied up with mobile manufacturers to preload their apps on new devices. Mark Ranson, a South Korea-based associate analyst on research firm Ovum's consumer team, says the possibilities are almost endless once the service has scaled. He says: "They can launch anything, depending on the market. Content services could be very popular. We are also coming to a stage where people are willing to pay even for messaging."

However, he concedes that in India, scaling up may take longer as far as revenue is concerned. "In Japan, users are willing to pay a lot for digital content. People will get more accustomed in time. But companies such as Line Corp and Tencent are not concerned with monetisation in the short term - they just want to become the largest player."

The Giants
No discussion of scale can ignore WhatsApp, which has over 300 million users globally and a monthly average user (MAU) base of over 200 million. WhatsApp reportedly has over 20 million users in India, although in an email response to Business Today, business development head Neeraj Arora said only that the "company was seeing tremendous growth in India". WhatsApp has a unique monetisation model - users pay $0.99 after a year of free use. Until July, the company charged iOS users this amount upfront. "With around 30 per cent of WhatsApp users being on iOS, this meant a monetisation of at least $100 million at any time," explains Sanchit Vir Gogia, Chief Analyst and Group CEO of New Delhi-based Greyhound Research.

The other big player is Facebook, with over 70 million users in India, a large chunk of them on mobile. It has a standalone messaging app, though Country Growth Manager Kevin D'Souza says messaging is deeply integrated and a part of the Facebook experience. Facebook does not have a specific monetisation strategy for messaging. However, it is investing in ensuring that the message is delivered across devices and networks. "A large number of people is on feature phones, and that is a focus area for us," says D'Souza.

But with WeChat and Line closing in on MAUs, leaders such as WhatsApp may have to think up new ideas to stay in the game. "WhatsApp is at a pretty cool point in its life cycle," says Ovum's Ranson. "But for the best chance to maintain their strong position, they should look at other revenue streams."

He says there will be consolidation in India, as there was in South Korea, where KakaoTalk emerged as the leader after many others came and went. "Globally, there is going to be some fragmentation," says Mittal of BSB. "India will have at the most three players in the long run."