It's hard to say if a new government at the Centre affects economic growth or not but that has been the perception among a number of corporate leaders and economists for years. There is always a fear of change even if there is no evidence to suggest that a change in government slows economic growth. In the latest Business Confidence Index (BCI) survey for the October-December quarter, 43 per cent respondents believed a new government at the Centre could impede GDP growth; 40 per cent thought otherwise.

The BCI for the October-December quarter rose on expectation of marginal improvement and status quo on most micro- and macro-economic indicators. The BCI - on a scale of 100 - was at 50.5 compared with 48.7 in the previous quarter and 49.3 in the quarter before that. Market research agency C fore quizzed 500 CEOs and chief financial officers across 12 cities for the survey. "I think people are naturally optimist," says U.R. Bhat, Director at Dalton Capital Advisors (India). The respondents were optimistic about a bunch of parameters, including cost of raw material, utilisation of production capacity, profit pick-up, inventory of raw material/finished goods, hiring and imports. In 11 out of 22 parameters, more than 50 per cent respondents expected things to remain unchanged in the January-March quarter compared with the previous quarter. For instance, 45 per cent expected raw material prices to rise in the current quarter. The corresponding figure in the previous survey was 56 per cent.

"People expecting raw prices to come down is fairly reasonable," says Bhat, adding that the commodities market has been down for the past few quarters. "Unlike cement, most commodities are internationally-linked, and there are no significant trade barriers in India. International markets are generally softer partly because Europe is in a bad shape and China is in turmoil. China's exports have come down dramatically. China's economy is built on low-value exports, and in the light of trade war, a large part of its capacities will go idle," he says.

As many as 56 per cent respondents expected fresh investments, both public and private, to slow down in the run-up to the general elections. A large number - 63 per cent - expected populist measures from the current government in the current quarter, including announcements in the interim budget. "As long as the measures are taken in a phased, rational and targeted manner, I will not lose much sleep over it," says Anand Rathi's Hajra.

Experts say some populist measures are essential to address rural distress and will have a positive impact on growth, investment and overall economic conditions. Several state governments have already increased MSP sharply and there's a lot of chatter around UBI (universal basic income). UBI, in its purest form, is not possible to implement, says an economist, as it entails expenditure of Rs 22 lakh crore, roughly 11 per cent of GDP. More targeted income support for the bottom 20-30 per cent of the population will boost demand for goods and services.

The survey captured expectation of better capacity utilisation in the current quarter --79 per cent respondents predicted improvement or no change as compared with just 64 per cent in the previous survey. But respondents expressed concern over some areas in the January-March period. These included cost of external finance, investment in business operations and exports. For instance, 58 per cent said cost of external finance would increase in the current quarter as compared to 64 per cent in the previous survey. 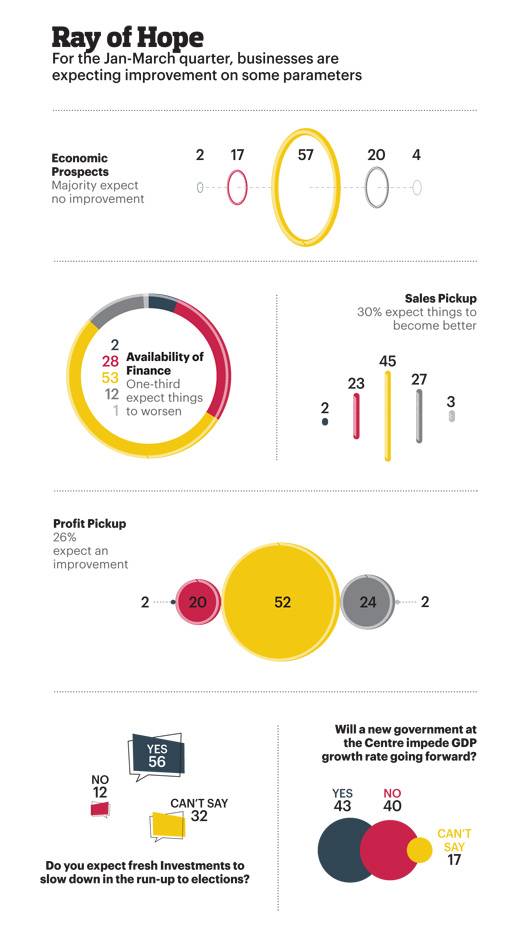 At present, credit growth is 14 per cent and deposit growth is 9 per cent, which shows there's more demand for credit than there is supply of deposits. In such a scenario, the likelihood of deposit and lending rates going up is high. Also, after the IL&FS crisis, companies are increasingly becoming more dependent on bank-based finance than market-based finance. From 2006 to 2018, banks had been losing their share of the corporate financing pie, which is now beginning to reverse to an extent. "Issuances in commercial paper and debt markets have taken some hit. The best case will be no increase in rates," says Hajra.

As a supplement to the BCI survey, we do an assessment of other economic indicators. The lower-than-expected IIP growth might prompt the RBI to downgrade GDP growth estimates for the current financial year. The RBI's current estimates peg economic growth for 2018/19 at 7.4 per cent, which still makes India one of the fastest-growing global economies.