National networks are aggressively putting in place regional strategies to consolidate their positions.

V. Kalyanasundaram, the MD of Polimer TV, a Tamil general entertainment channel, is a worried man. The channel with 180-odd gross rating points (GRP) had never been able to match up to the might of market leader Sun TV with 1,000 GRP, but had created a niche for itself by airing dubbed Hindi content, including Sony's popular show Bade Achhe Lagte Hain and Colors' Balika Vadhu. The channel had also managed to get its share of advertisers until national networks, such as Star India and Zee, decided to seek a slice of the regional language pie in Tamil Nadu.

Indeed, national networks are aggressively putting in place regional strategies to consolidate their positions. This is not surprising considering regional channels made up about 28.4 per cent of India's total TV advertising ad pie of Rs 15,550 crore in 2014, according to the FICCI-KPMG Media and Entertainment Report.

Star, for instance, acquired Maa TV for Rs 2,500 crore in February this year to enter the Telugu market. The broadcaster already had regional channels in West Bengal, Karnataka, Maharashtra, Kerala and Tamil Nadu, where it has made further inroads. Star had acquired Vijay TV almost a decade ago but had less than 10 per cent market share for eight years. In the past couple of years, Star Vijay has grabbed 25 per cent market share. Its GRP has shot up from 100 to 400 in one year, on the back of investments in original content. Its strategy to air cricket with live Tamil commentary also paid dividend.

Star India's sudden rise and the aggression from other national players has fragmented the ad pie in Tamil Nadu with bulk of the advertising going to Sun TV and, now, Star. Kalyanasundaram's biggest worry, however, has not been so much about the ad share, but the cost of creating original content. "With competition heightening, we have started investing in original content and the cost is significantly higher. The per-episode cost of a dubbed show is Rs 25,000, but an original show costs us anywhere between Rs 75,000 and Rs 1 lakh," he says. The escalating cost is obviously eating into its profits.

In December 2012, TV18 took over the news and entertainment channels of ETV. Viacom 18, TV18's joint venture partner, which takes care of the programming of ETV's entertainment offerings, has now extended the Colors franchise by rechristening the ETV channels: ETV Marathi is now called Colors Marathi, while ETV Bangla is called Colors Bangla. Similarly, Zee has also established itself as a player in most regional markets, including Maha-rashtra, West Bengal, Tamil Nadu, Bihar and Odisha. 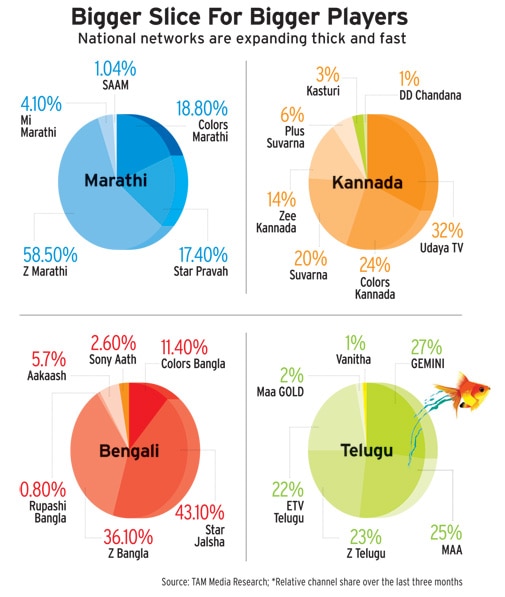 The national networks, by virtue of their deep pockets, are pumping in truckloads of money to create more aspirational content with high production values. Star, says COO, Sanjay Gupta, made its foray into the Bengal market with Star Jalsha to target a younger audience. "Before we came in there wasn't enough money being spent on content so the channels looked flat and boring. Production quality was poor and the stories were meant for 45-year-olds, whereas we did a show called Ekhane Akash Neel, which was a love story. It managed to attract a younger audience and, within months, viewership share of the Bangla entertainment genre increased by 50 per cent."

ETV Kannada, or Colors Kannada, along with other ETV channels, piggybacked on some of the marquee Colors fiction and non-fiction programmes, such as Balika Vadhu and Bigg Boss. In fact, the Kannada version of dance reality show Jhalak Dhikla Ja became the top-rated show in the state. "In December2013, ETV Kannada was at the fourth position in the Kannada general entertainment space (the market leader is Udaya TV), from there it has gone on to become a strong number two. In terms of absolute viewership, it has nearly doubled," says Sudhanshu Vats, CEO, Viacom18. Colors Mara-thi's viewership has also nearly doubled in the past two years. "The team, however, has struggled in Bangla, where it is a distant third, but from July 2013, we have managed to double our share. We are still third, but the gap has reduced," adds Vats.

Better content and high production standards have also resulted in growth of the ad monetisation prospects by over 15-20 per cent in most markets. For instance, when Star acquired Asianet in 2008, it was a 600 GRP channel. Today, it commands over 1,000 GRPs and its ad rates have increased by 25 per cent. A 10-second ad spot on Asianet, which cost Rs 6,500 last year, has increased to Rs 10,500 now. Similarly, a 10-second spot on ZEE Marathi (a 400 GRP channel) has increased from Rs 8,000 to Rs 10,000 in the past year. "As they are pumping in more money on programming, content is much better and GRPs have dramatically risen. Ad rates have also gone up," says Sarfaraz Ansari, Business Mana-ger, DDB Mudra Max, the media planning arm of DDB Mudra.

While big networks are growing from strength to strength, smaller channels are increasingly feeling the heat. With the ad pie expanding, channels such as Mi Marathi in Maharashtra or Polimer TV and Raj TV in Tamil Nadu may not have lost out on ad revenues, but they have neither been able to expand their viewership base. The worry has been the over 50 per cent escalation in content cost to stay in the race. Mi Marathi, say media planners, is struggling with just 25 GRPs. Small channels have a two-pronged battle to fight, says Jai Lala, Head Trading and Partnerships, Group M. "Not only do they have to invest in original content, but also have to compete with big networks to get a slice of the ad pie. This is getting increasingly difficult for them," he says.

SURVIVAL OF THE FITTEST

Regional presence enables national networks to offer a wider bouquet to advertisers and, thereby, provides them with higher bargaining power. Hindi viewership accounts for about 45 per cent of the total viewership pie in India, with Hindi GE channels and Hindi movies contributing 31.1 per cent and 13.5 per cent, respectively, while regional viewership is at 23.3 per cent. The fact that 41 per cent of Indians speak Hindi and 59 per cent speak other Indian languages has made big players turn aggressive. "There are more people who are consuming regional languages. So, the opportunities are there to stay," says Vats.

Most national networks have used the acquisition route to enter regional markets. Star's acquisition of Asianet and Maa, or TV18 buying ETV, were strategic moves that helped the big companies get a solid footing in the regional space because these channels already had a dominant presence in the markets they were operating in. The superior content strategy and marketing muscle of national networks have taken them to the next level. "There is a dearth of good talent in regional markets. Most of the good talent either prefers working for films or larger networks, be it Sun or Star."

Heightened competition has forced smaller channels, typically the number four or five in the pecking order, to either invest in superior content or die a natural death. Mahua TV in Bengal, for example, succumbed to the national onslaught. Rupashree Bangla, the GE offering of ABP Group, is also on the verge of closure.

The main issue, say industry experts, was not so much about the money power as it was about the inability to invest in the right kind of content and talent. "Getting good creative talent is a huge issue," says Kalynasundaram of Polimer TV, adding: "Most good talents either prefer working for films or larger networks, be it Sun or Star."

In fact, Monica Nayar Patnaik, MD, Eastern Media, a media company in Odisha, says her company had been debating the launch of a GE channel for the past two years. Recently, it shelved its plans realising it will not be easy to compete with market leader OTV and national broadcasters. "We are now debating whether our offering should be a specialised one...maybe a music channel," says Patnaik.

On the other hand, the Malayala Manorama Group in Kerala, which launched its GE channel Mazhavil Manorama three years ago, is already at the second place in Kerala with 400 GRPs, but way behind market leader Asianet. P.R. Sathe-esh, Head of Sales and Marketing, Mazhavil Manorama, says the strategy from day one has been to push up the bar for content creation. "While Asianet invested more on household dramas, our strategy, so far, has been to give differentiated offerings such as political satires, sitcoms and high-quality reality shows, such as India's Voice, where we got in Shankar Mahadevan to host the show."

Satheesh claims its differentiated content has enabled the company to strike a chord with the younger audience. "The long tail of entertainment channels will definitely see an erosion if smaller channels don't invest in original content," he says.

India has over 800 channels, out of which half are regional channels. With national broadcasters making inroads into regional markets, smaller players might have to have a relook at their strategy or wither away. The other option is to sell their businesses to a bigger player. How-ever, barring Multi Screen Media, all national broadcasters already have their regional bouquets in place. So, is there really any scope for smaller regional channels to find buyers?

Raja Lahiri, Partner at consultancy Grand Thornton, says acquisitions will not be easy. "Many regional channels have issues with low viewership, ratings and revenue growth drivers. From an M&A perspective, lot of work will have to be done by the acquirers to derive synergy benefits and generate revenue growth after acquisition," he says.

According to Jagat Dave, MD, Ambit Corporate Finance, if the market is large enough and growing, there will still be scope for smaller channels to get buyers. "The acquirer will evaluate the brand equity and economics of the channel in light of the extension of ad-sales, promotion and distribution muscle of the network." Despite having too many players, Tamil Nadu and Kerala are growing in terms of ad monetisation and viewership, and Dave feels smaller channels in these markets could get buyers. "The market is still growing and, therefore, smaller players are surviving. When growth stabilises and the grab for market share starts, there will be consolidation in the sector," he explains. 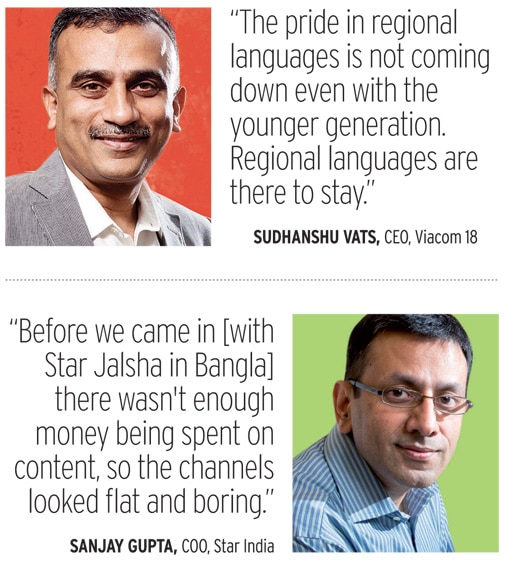 Atul Phadnis, CEO of TV programming guide company, What's On India, agrees: "A regional acquisition is always determined by the size of the market. The way a Tamil Nadu or an Andhra market behave will be quite different from Bihar or Orissa." There-fore, if channels, such as Lakshya TV in Orissa, have shut down it is because there is no market for more channels. However, a broadcaster like Raj TV in Tamil Nadu may be able to attract buyers.

However, Tarun Katial, CEO, Reliance Broadcast, which launched Big Ganga in Jharkhand, finds the larger markets of Tamil Nadu, Andhra, Maharashtra and Bengal to be extremely crowded. "We realised that in most regional markets the intensity of competition is huge. Bihar and Jharkhand had its own socio-cultural identity, but there was no sustainable platform to fulfil the entertainment needs of that region." Big Magic, which competes with Zee Purvaiya and ETV in Bihar and Jharkhand, is already the market leader with 50 GRPs within a year-and -half of it launch.

Even if one goes by Dave's and Phadnis' argument that regional acquisitions are still likely, the fact remains that most states have a long tail of channels. Will all of them survive? The jury here is divided. While a considerable number of experts believe that they will fold up, the likes of Smita Jha, Leader (Media and Entertainment) PwC, expects the market to churn. "Nothing will fold up. They will try to find out new positionings and make themselves more relevant. In a country of 800 channels, less than 10 channels have closed down so far."