Once the undisputed leader, SAIL has been outrun by private sector peers JSW and Tata Steel. But the rejuvenated steelmaker is back in the black and eyeing the top spot.

Barely two weeks after he had taken over as the Chairman of India's largest state-run steel company, 58-year-old Anil Kumar Chaudhary was staring at a major crisis. On October 9, 2018, an explosion at the Bhilai plant, the largest production unit of Steel Authority of India (SAIL), killed 14 workers. The blast occurred in a gas pipeline connected to the coke oven section of the plant during a maintenance job. It was not a one-off incident, though. On May 24, there was a minor fire at the Bhilai plant, though no one was injured. In June 2014, six people, including two deputy general managers, had died in that factory due to gas leakage. In a career spanning over three decades in the public sector company, Chaudhary's tenure at the top started on a troubled note.

"It was really unfortunate... and I had to face it soon after I took charge. But we have become more careful now. We are doing whatever lies within our realm so that not even a single fatality happens at SAIL in the future. All our plants have been given strict instructions that no production will happen at the cost of safety," he says.

If the Bhilai incident was baptism by fire, the new chairman has seen a lot of tailwinds as well. For instance, in spite of the tepidness around last year's festive season that impacted consumer-centric sectors, domestic demand for steel was on the rise, pushing prices up considerably. During April-January 2018/19, India's consumption of total finished steel stood at 79.98 million tonne (MT), a 7.8 per cent increase over the year-ago period, according to provisional data released by the Joint Plant Committee. The dark days of big imports (of cheap steel) and commodity dumping by China are no longer plaguing the industry. Better still, SAIL's financial health seems to be on the mend.

Earlier, it was a different story. The central public sector enterprise (CPSE) suffered losses for three consecutive years between FY2015/16 and FY2017/18, resulting in a cumulative deficit of over Rs 7,000 crore. It endured 10 consecutive quarters in the red - between April 2015 and September 2017 - just one short of its worst string of quarterly losses during 2000-2002. 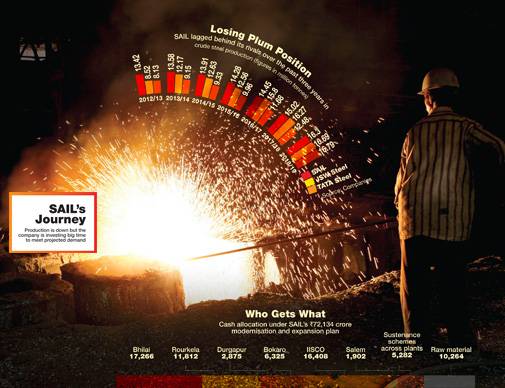 By the time Chaudhary took over in September 2018, the storm had blown over to some extent. SAIL had been profitable for three consecutive quarters and was well on its way to posting a profitable fiscal after three years. In the first nine months of 2018/19, its revenue grew more than 15 per cent with a net profit of Rs 1,710.42 crore against a net loss of Rs 1,297.28 crore in the year-ago period.

The financial turnaround is a shot in the arm although SAIL has lost its coveted tag of India's largest steelmaker. Sajjan Jindal-led JSW Steel overtook the company in 2016/17 to be in the pole position while Tata Steel bagged the top spot in the last fiscal, thanks to a capacity expansion following its acquisition of Bhushan Steel. SAIL's catchy tagline - there is a little bit of SAIL in everybody's life - no longer resonates with its current market position, and its fall from glory still rankles with Chaudhary (see graphic Losing Plum Position).

"Last year, our growth was close to 8 per cent compared to JSW's 3 per cent. Tata Steel saw better growth due to its acquisition of Bhushan Steel. But considering how we grew in the last fiscal, we left all our competitors behind," he says.

His words may sound a tad defensive, but one can easily detect a steely resolve to get the job done. "The fire is still burning and the desire is there. It is not that we are happy with what we have achieved in the last financial year. If everything goes well, we should again be ahead of our peers this year and should have the privilege to be the largest steelmaker in the country," he vows. "We have the capacity, capability and facilities, and my teams are fully charged up. They want to achieve that level, and I am sure that within the current financial year, we should be No. 1 in crude steel (production). This is widely discussed across the company and we have set our targets accordingly."

Now that SAIL's Rs 72,000 crore modernisation and expansion programme (see graphic Who Gets What) is nearing completion, its capacity is expected to grow significantly. So, the company has set a crude steel production target of 19.7 MT for the current fiscal, a 21 per cent jump over 2018/19. The protracted programme was undertaken in 2007/08 to increase capacity to 21 MT per annum and should have been over by 2013/14. SAIL could also see a slight rise in debt level in 2018/19 owing to capital expenditure requirements in the final stage of the long-drawn-out project. 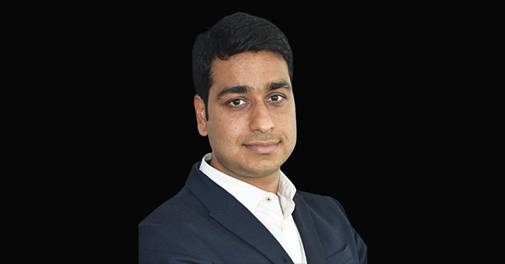 "The outcome (of the ramp-up) has finally started to reflect in terms of volume. The Indian market is favourable right now, and SAIL has to focus on growing its capacity and keeping at it. For this company, the story is all about volume as it is a high-cost player compared to others," says Dhruv Muchhal, Equity Research Analyst (Institutional Equities) at Motilal Oswal Financial Services. "Both JSW Steel and Tata Steel are looking at expanding production capabilities and acquiring companies so that they have 24-25 MT capacity by 2021/22. For SAIL to outrun both on a sustainable basis is difficult. It may do it this year as others are in expansion mode. But when that phase is over, SAIL will find it difficult to keep pace with them," he adds.

The CPSE is also lagging behind its private-sector peers in terms of techno-economic parameters. Compared to JSW and Tata Steel, it has the lowest percentage of value-added steel in the product mix, thus weighing down overall net realisation and margins. Other areas of concern include blast furnace productivity, coke rate and energy consumption. Moreover, the company's fixed overhead costs are the highest among its peers. For the same quantum of steel produced, SAIL employs nearly 77,000 people compared to 34,072 at Tata Steel and 11,619 at JSW.

"This is because we have a mix of old and new facilities. If our hot metal capacity is, say, 20 MT, half of that is coming from the old units where the techno-economic parameters are lower," explains Chaudhary. "If we compare our new facilities with those of Tata Steel, JSW or any other company, they will be on a par."

On the positive side, SAIL is bolstered by huge land banks and raw material linkages. Its iron ore requirements are fully met through its captive mines, which produced 26.83 MT of iron ore in 2017/18. The company operates eight iron ore mines and two flux mines spread over Jharkhand, Odisha and Madhya Pradesh.

The negatives, however, tend to outscore the positives, with a significant bearing on competitiveness. "SAIL is cushioned by captive resources when it comes to raw material (iron ore), but employee cost is a big issue. The only way to manage it is through increasing volumes," says Muchhal of Motilal Oswal. "Also, it will always be more susceptible to market volatility as it operates at the lower level (of margins). But the main issue here is the high-cost structure which is permanent and cannot come down in a hurry unless it massively ramps up its capacities."

Chaudhary agrees there is a need to ramp up fast to meet all commitments but does not consider it necessary to reduce the workforce. "I want to improve productivity not by firing people or throttling hiring when people leave this organisation. Also, we need some fresh blood to take the technology forward. We are not cribbing about per-capita employee cost. It will be higher compared to our peers, but we are not worried about it."

Another sore point is SAIL's lack of access to cutting-edge technology, which, some think, is the root cause of all issues. The company tried to fix it by collaborating with global majors keen to tap the rapidly expanding Indian market but none of its efforts fructified. Talks with the South Korean steel producer POSCO failed on two occasions, and a proposed joint venture with the world's No. 1 steelmaker ArcelorMittal SA for an $897 million auto-grade steel plant is yet to take off.

"We did look at collaborating with POSCO on FINEX technology, but later realised it is not an established technology worldwide. That is why we decided not to pursue POSCO," says Chaudhary. "We progressed well with ArcelorMittal until last year and were about to close the deal in September. But it was hindered as the company got too busy with the Essar Steel acquisition. We have not called it off yet; it is still on the table. I have written twice to Lakshmi Mittal and got a reply for the first letter but not for the second. It is a fact that our progress is slow and we should have moved faster. Even if it does not happen, we have the option to approach others like POSCO or Hyundai Steel or someone else. We cannot be stranded forever, waiting for ArcelorMittal."

Chaudhary is looking forward to another phase of expansion that will also include a greenfield project. SAIL is in talks to build a 3 MT plant in Odisha whose capacity can be increased up to 6 MT. It may come up in the same area where POSCO's mega steel plant (India's largest FDI project at the time) was supposed to be built. In line with the 2017 national steel policy that has set a target of 300 MT crude steel capacity by 2030/31, SAIL wants to ramp up its capacity to 50 MT but does not want to repeat its mistakes.

"Our modernisation and expansion will include both brownfield and greenfield projects. We have already started working on it, but prior to that, we must start realising gains from our existing facilities. Our focus is to utilise all existing units in the best possible way, produce as much as possible, sell it and get the maximum cash flow. It should help us bring down the debt-to-equity ratio (net debt-to-EBITDA ratio) before we go for the next round of modernisation," says Chaudhary.

"Last time, it was a mistake to split modernisation and expansion into many packages. If we carry it out on a turnkey basis, we have a higher chance of avoiding delays and cost overruns," he points out. "We also started to work simultaneously in all our factories, but unless we have good teams, modernisation may not make any sense. This time, we will have good teams in place for project implementation from the start."

It is clear that the man at the helm of the Maharatna company knows how to thwart challenges to stay the course. But success will be all about execution - the Achilles heel of any public sector undertaking in India.

Get latest news & live updates on the go on your phone with our News App. Download The Business Today news app on your device
More from Sector Report