Honda said the replacement of the fuel pump in the affected cars will be carried out free of cost at its dealerships across India in a phased manner starting from 17th April 2021. Owners are being contacted individually

In the first vehicle recall exercise after India put in place a formal recall policy earlier this month, Japanese car major Honda Cars India on Friday said it is recalling 77,954 units of its select models produced mostly in 2019 to voluntarily replace fuel pumps.

A continuation of a similar exercise it undertook last year when it fixed 65,651 units of cars manufactured in 2018, the fuel pumps installed in these vehicles may contain defective impellers, which could, over time result in engine stopping or not starting, it said. With the current round of recalls, the overall number of cars covered under this has shot up to 143,605 units.

India's new recall policy has provisions for levying a penalty of upto Rs 1 crore on companies for producing defective vehicles. The penalty would be liable on recalls of more than 6 lakh two-wheelers, 1 lakh plus four-wheelers and over 3 lakh three-wheelers and quadricycles.

Honda said the replacement of the fuel pump in the affected cars will be carried out free of cost at its dealerships across India in a phased manner starting from 17th April 2021. Owners are being contacted individually.

"As the dealer facilities are currently functioning with limited staff to ensure strict implementation of safety and distancing norms specified by the government authorities, customers are advised to visit the dealer with prior appointment to avoid inconvenience," the company said in a statement. "The customers can check whether their cars are covered under this campaign by submitting their 17 character alpha-numeric Vehicle Identification Number (VIN) on the special microsite which has been created on the company's website ([www.hondacarindia.com)]www.hondacarindia.com)," it said. 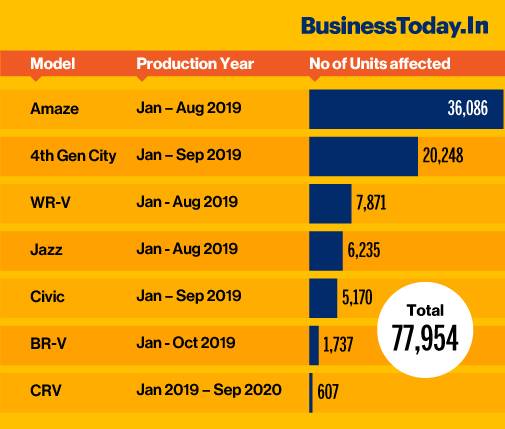 Once considered a bad word that symbolised poor manufacturing processes, product recalls have become routine in global automotive industry as machines have become more complex and prone to malfunctioning from even a minor oversight in the supply chain. They have also increasingly become a mark of more honest and transparent business practice as more and more companies have initiated recalls in recent times.

In December 2019, Maruti had recalled 63,493 units of its mid size sedan Ciaz and utility vehicles Ertiga and XL6 to inspect the motor generator units.  In the same year in July, American carmaker Ford recalled 22,690 units of its SUV Endeavour produced at its Chennai factory over 10 years between February 2004 and September 2014 and around 30,000 units of the Freestyle, Figo and Aspire.

The biggest recall so far in India was carried out by General Motors in July 2015 when it conducted the exercise in 1.7 lakh units of the small car Beat. Ford has undertaken recalls the most number of times. In August 2012, it announced an inspection of over 125,000 cars in India for possible defect in the rear axle and a replacement of power steering hose that may result in fire in extreme cases. In September 2013, it had expanded the recall to cover around 1.65 lakh cars.

All these recalls were part of a voluntary initiative as a proactive measure for inspection of vehicles suspected to be defective by industry body Society of Indian Automobile Manufacturers (SIAM) in 2012. More than 2.5 million cars have been recalled in India so far but the dreaded word has since lost its sting.