Why is Ajay Piramal exiting the Shriram Group of companies in which he invested heavily only six years ago?

Most of Ajay Piramal's moves, since he took charge of the Piramal Group four decades ago, have greatly benefitted it. One such was the deal to sell Piramal's pharma formulations business in 2010, then worth around Rs 2,000 crore, to Abbott for a whopping $3.8 billion (Rs 18,500 crore at the time). He has been investing the vast cash pile earned from the sale prudently - targeting over 20 per cent annual profit, exiting with handsome earnings whenever he felt the time was ripe. He bought an 11 per cent stake in Vodafone India, for Rs 5,856 crore - in two tranches in August 2011 and February 2012 - and exited in April 2014 with Rs 8,900 crore.

Another of his major investments, a total of around Rs 4,500 crore, was in the Shriram Group's companies in 2013/14 - Piramal Enterprises acquired a 20 per cent stake in the holding company Shriram Capital for Rs 2,014 crore, a 9.9 per cent stake in Shriram Transport Finance Co (STFC) for Rs 1,652 crore and an identical 9.9 per cent in Shriram City Union Finance Co (SCUF) for Rs 790 crore.

With Ajay Piramal becoming chairman of Sriram Capital in 2015, it was widely felt that he would remain invested in the group for a long time, and might even merge his own financial services business - which, too, has been doing excellently contributing 53 per cent of his Rs 13,215 crore revenue in 2018/19 - with it. But that is not to be. "We are looking at various options for creating maximum value for the shareholders of both Piramal and Shriram groups and one of those is the plan to exit the Shriram Group," says Ajay Piramal.

Though Ajay Piramal has not specified how soon he is likely to pull out, analysts have been wondering why he took such a decision at this stage. This is hardly the right time to exit the non-banking finance company (NBFC) sector as it is facing a liquidity crisis since the IL&FS collapse last September, and valuations are low. Besides, both SCUF and STFC are among the NBFCs that have withstood the shock well. SCUF, which finances small and medium enterprises, provides gold loans, loans for two-wheelers, as well as housing loans through its subsidiary Shriram Housing Finance, had assets under management (AUM) of Rs 29,600 crore in 2018/19, with net profit of Rs 988.9 crore.

"Despite tepid gold loan disbursements, the two key segments - MSME and two- wheelers - fired on all cylinders with disbursements close to record highs and, as a result, AUM grew 3 per cent quarter on quarter and 7 per cent year on year," Motilal Oswal's analysts said in their report on SCUF. STFC, which holds 25-27 per cent share of the second-hand commercial vehicles market, had an AUM of Rs 1,04,482 crore in 2018/19 with net profit of Rs 2,563 crore. Its AUM and net worth have been growing in double digits for the last five years.

Nor does Ajay Piramal need funds at this point for his own businesses. Between September 2018 and March 2019, Piramal Enterprises raised Rs 16,500 crore through non-convertible debentures and bank loans. The company has Rs 5,400 crore in the form of cash and bank lines it has yet to utilise. As for his privately owned Piramal Realty, Ajay Piramal has always kept it separate from the listed Piramal Enterprises, avoiding cross-financing and raising money only from other sources.

The Shriram Group's 81-year-old founder R. Thyagarajan has asserted that his relationship with Ajay Piramal remains cordial and he would be happy if the latter continued as chairman of Shriram Capital even after relinquishing his stake. But close observers maintain that there was some degree of mismatch between the cultures of Shriram and Piramal groups, which may have hastened Ajay Piramal's departure. The Rs 76,000-crore Chennai-headquartered Shriram Group was started by Thyagarajan and two other co-founders in April 1974 as a chit fund to finance truckers.

However, even as the business grew over the years and new companies were set up, none of the family members of the founders was groomed to take charge, making succession a matter of concern. The overarching figure at the group for over a decade was Arun Duggal, who was chairman of all the three main entities - Shriram Capital, STFC and SCUF. Duggal, however, resigned in November 2014, and is currently chairman of rating agency ICRA.

Ajay Piramal's investment in Shriram as a strategic investor began close to the end of Duggal's tenure. He started playing a bigger role in the companies after Duggal departed - following which, sources claim, a number of long-time senior executives also resigned. Despite this, however, it is believed that Ajay Piramal was not able to bring about the kind of changes he wanted in the group. "Shriram is a good investment as it has a strong brand name and it will be a good long-term play for us," Ajay Piramal had told Business Today three years ago. "It has worked out reasonably well in terms of investment. We are confident that in the long term it will be a good investment and we see Shriram as a long-term partner."

But two years later, when he spoke to BT again, a degree of disenchantment seemed to have crept in as he discounted any immediate chances of his financial business being merged with Shriram. "The culture of the 60,000 people at Shriram is different from that of the people at Piramal," he said. "I think we'll waste a lot of time if we try to merge them. Both are doing well. Let them grow and we'll look for a merger at the right time." A Shriram Group spokesperson said the group does not want to comment anything further at this point of time.

While talk of a merger or a partnership of Piramal Enterprises and the Shriram Group was rife, Ajay Piramal even got global consultants McKinsey to study STFC and SCUF. Some key Piramal executives joined the Shriram Group, led by Rajesh Laddha - Piramal's chief financial officer and who had been with the group since 2001 - as CEO and Managing Director of Shriram Capital in June 2017.There also followed an attempt to merge SCUF with IDFC Bank, but it fell through due to regulatory complications, as well as objections from shareholders of both. Ajay Piramal was also said to be miffed about STFC's undisclosed exposure of Rs 870 crore to a group distressed entity in infrastructure, made through its promoter company, Shriram Venture. 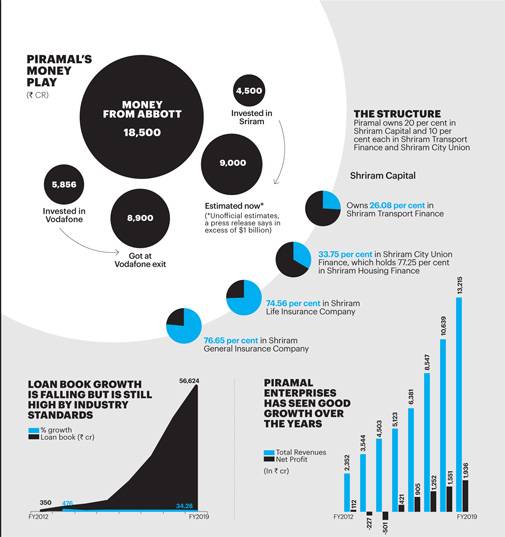 Piramal Enterprises' borrowers comprise corporate and medium-to-large scale enterprises, while companies like STFC and SCUF have been lending largely to retail borrowers and micro, small and medium enterprises (MSMEs), where financial risk is higher. On second thoughts, Ajay Piramal may have decided to stick to his area of specialisation. All Piramal investments and acquisitions before Shriram had been in multinational companies or those following multinational practices. Also, though STFC and SCUF are doing well, some of Shriram's other companies are under pressure following the repeated jolts of the last few years - demonetisation, GST implementation and the post-IL&FS liquidity crisis.

The Reserve Bank of India decision to reduce the time to recognise and report non-performing assets (NPAs) from 180 days to 90, has added to the difficulties. Again, there are worries about the future of the two-wheeler financing market, since two-wheeler sales' growth is slowing down. "Around 38-40 per cent of SCUF's loans in 2018/19 were for two-wheelers, which could increase to 45-50 per cent in the next two years," says Shubhranshu Mishra, analyst with BOB Capital Markets.

Unconfirmed reports maintain that Anand Mahindra, with whom Ajay Piramal has been holding discussions, may come in as an investor to replace him. KKR and Blackstone have also shown interest. "We have been talking to different interested parties from time to time and nothing is confirmed; it is an ongoing process and there is nothing more to say on this at this point of time," Ajay Piramal reacted to such speculations in a recent conference call. A spokesperson for Mahindra refused to comment.

In September 2018, the two private equity (PE) giants were said to be considering acquiring the Piramal Employees Trust and PE heavyweight TPG's stake in Shriram Group companies for over $3 billion. A merger of the three entities - Shriram Capital, STFC and SCUC - is also being considered, since it would create more value for exiting shareholders like TPG and Piramal. (Shriram Capital already has a 26.08 per cent stake in STFC and 33.75 per cent in STUF - see Piramal's Money Play.) "We're looking for the right partners. There is no time limit by which we have to exit," says Ajay Piramal.