Even as the country was glued to protests against the Citizen Amendment Act, state representatives had gathered in the national capital on a wintery December evening to discuss something as mundane as improving collections from Goods and Services Tax (GST). But the 38th GST Council meeting, a stone's throw from New Delhi's protest site, Jantar Mantar, on December 18 also saw its share of protests, arguments and drama. Amid the gloom and doom in the economy that has resulted a big shortfall in GST collections, which has, in turn, led it to a delay in central government payments to states - the meeting, as was expected, turned out to be stormy, with state finance ministers up in arms against the Centre.

The reasons were simple. A number of states are facing a big revenue shortfall due to GST implementation as they gave up their taxation powers to the Centre and GST is a consumption tax (consuming states gain at the cost of manufacturing states). Also, it is no secret that revenue growth from GST has been muted and the Centre is holding back payment of a part of the revenue meant to be disbursed to states - under GST, there is a provision that the Centre will compensate states for any loss due to implementation of GST for the first five years. The Centre is now saying it does not have enough money to pay.

GST collections have remained subdued, with average monthly mop-up in the first eight months of the year at Rs 1 lakh crore as against the target of Rs 1.1 lakh crore. With the government looking at an annual shortfall of around Rs 1 lakh crore, states seem to be bearing the brunt as under GST, they have given up their power to fix tax rates and, hence, depend largely on the Centre for making up any revenue shortfall. But with the Centre itself facing a revenue crunch, it has started delaying the payments provided for under the GST law. Around half-a-dozen non-BJP ruled states have threatened legal action against the Centre if states' dues are not paid.

West Bengal Finance Minister Amit Mitra, while coming out of the meeting, dropped a bombshell when he told the media waiting outside the NDMC Convention Centre that from the projection that the central government made in its presentation during the meeting, it appears that there would be no money left by February 2020 to compensate states for losses due to GST implementation. 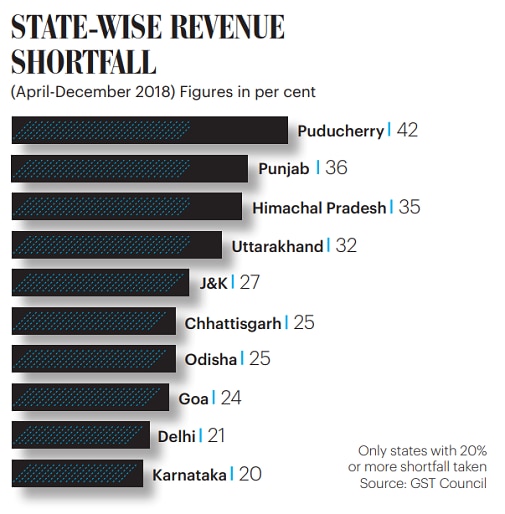 Compensation: The Trigger for a Showdown

Manish Sisodia, the Deputy Chief Minister of Delhi, made no bones about his unhappiness at the delay in payment of compensation to states. The Centre had not paid this amount for four months - August, September, October and November - and states were reportedly finding it difficult to meet their day-to-day expenses. According to sources who were present in the meeting, Sisodia lambasted the Centre for not releasing the compensation amount despite it having Rs 42,000 crore in surplus. He apparently told the council that the state's monthly expenses were Rs 5,000 crore, and if its dues were more than Rs 2,000 crore, how could it run the state? Delhi had got Rs 3,5000 crore compensation from the Centre last year, and expects to get Rs 3,000 crore in the current financial year. The government, of course, released Rs 35,000 crore of the Rs 42,000 crore surplus ahead of the council meeting to pacify states.

According to estimates by ratings agency ICRA, the GST compensation requirement of a sub-set of just nine states - Karnataka, Kerala, Gujarat, Maharashtra, Punjab, Haryana, Rajasthan, Tamil Nadu and West Bengal - would double to - 60,000-70,000 crore in the current financial year. The timing of the release of such grants by the Centre would critically affect their cash flows.

The agenda of the council meeting hinted at the problem being faced by the government regarding compensation cess collections. "Among other issues, the GST revenue position shall be also discussed in detail in the meeting. This discussion is quite critical as lower GST and compensation cess collections have been a matter of concern in the last few months. The compensation requirements have increased significantly and are unlikely to be met from the compensation cess being collected," read the agenda note. Just a few days before the GST Council meeting, Finance Minister Nirmala Sitharaman had informed the Rajya Sabha that in the current financial year, Rs 55,467 crore were collected till October 31, 2019, and Rs 65,250 crore paid to states. The higher disbursement (than collection) was possible because of surplus from previous years. In 2018/19, collections were Rs 95,081 crore, and Rs 69,275 crore was released to states. In 2017/18, the first year of GST, Rs 62,596 crore was collected as compensation cess, of which Rs 41,146 crore was released.

The question states are facing is - despite the Centre's promise of making up for any shortfall, the compensation paid is linked to availability of money in the Compensation Cess fund. But not everybody agrees. In his pre-budget submission to the finance minister, Tamil Nadu Deputy Chief Minister O. Pannerrselvam said the obligation to provide GST compensation was not restricted to the amount of compensation cess collected. "The Union government is constitutionally obliged to make good any shortfall in GST collections," he said, adding that if the amount in the GST compensation fund fell short of what is payable in the bi-monthly period, the GST Council should decide ways of raising additional resources. He suggested market borrowing, which could be repaid by collection of cess in subsequent years.

Punjab Finance Minister Manpreet Singh Badal said that 25 per cent of the state's revenue in 2015/16 came from agriculture purchase tax. "We agreed to subsuming this under GST only after the Centre's promise of compensating us for the loss. Now, the Centre is saying that it has no money to pay, and has asked us to fend for ourselves," he said, calling it a default of sovereign guarantee.

No End in Sight

The issue of compensation cess is likely to remain a thorn in the flesh of states as the Centre will continue to struggle to meet their compensation requirements. The reason was explained by former finance minister, the late Arun Jaitley, in a blog last year. "The targets set for the state in the GST regime are unprecedently high. Even though GST commenced on July 1, 2017, the base year for revenue increase is 2015/16. For each year, a 14 per cent increase is guaranteed. Thus, with three 14 per cent increases compounded annually over the base year of 2015/16, this is close to reaching 50 per cent in the second year itself. It is almost an unachievable target," he had said. While compensation has been promised on assumption of 14 per cent growth in GST revenue, this year till October, the overall collections had grown a paltry 2 per cent. This explains the mismatch in cess collection and compensation requirement.

Pratik Jain, Partner & Leader, Indirect Tax, PwC India, says: "The issue of compensation to states is becoming more complex and all stakeholders will have to try and make it a self-sustainable model so that this compensation is not needed after five years as was contemplated earlier. One option for the Centre is to engage with states to see if the 14 per cent annual growth can be renegotiated to a lower rate with increase in the period of compensation beyond five years."

The Unsettling Issue of IGST

The Tamil Nadu Deputy Chief Minister recently raised the issue with the finance minister in a pre-budget meeting. He said the Union government was yet to provide the Rs 4,073 crore IGST arrears to the state for 2017/18. He said the Union government had resorted to incorrect accounting for IGST in 2017/18. "An amount of Rs 88,344 crore unallocated IGST was routed through the Consolidated Fund of India. If 50 per cent would have been distributed to states directly, they would not have been deprived of their rightful share of IGST and today the compensation fund would not have been facing a shortfall of Rs 48,650 crore," he said. A similar issue was raised by Manish Sisodia, who requested the Centre to pay the state the unsettled IGST amount of Rs 3,202 crore.

Though the central government had promised states compensation for any losses due to implementation of GST for the first five years, this may not solve the problem for many states who feel they sacrificed a lot of revenue due to the GST design. The manufacturing states, which are not necessarily also consuming states, say they are at a loss as GST is a consumption tax, collected in the state where the goods/services are consumed. It is not a new debate, but with the compensation arrangement coming under stress, manufacturing states have started raising questions about the viability of GST after the central compensation stops. "States like Chhattisgarh, which are not consuming states, will suffer heavily after the five-year period ends in June 2022 when compensation from the Centre stops," says T.S. Singhdeo, the Commercial Tax Minister of Chhattisgarh. He says the presumption during the drafting of the law was that in five years states would be able to find new sources of tax revenues which would put them in a position where they would not need compensation. "That is certainly not going to happen," he says. He is also not sure if extending the period of compensation by another three-five years will help the non-consuming states. He gives an example to explain: "In Chhattisgarh, we had an environmental cess of Rs 400/tonne on coal. We are producing 140 million tonnes coal every year. At 400 a tonne, we can earn a revenue of Rs 5,600 crore. Today, we are getting nothing. On this coal, we had a VAT of 5 per cent, which was coming to the state. Today, the rate is the same, but GST means half goes to the Centre and half comes to the state."

Chhattisgarh is facing a GST revenue shortfall of around 25 per cent assuming 14 per cent revenue growth since 2015/16. There are others like Puducherry, with a shortfall of around 40 per cent, Punjab (36 per cent), Himachal Pradesh (35 per cent) and Uttarakhand (32 per cent). The reason in case of Puducherry is specific to it. Before GST, it was over-reliant on central sales tax (CST). While the average contribution of CST to tax collections of states was 8 per cent, in case of Puducherry, it was 27 per cent. These deficits are unlikely to be wiped out by June 2022 when the five-year compensation period gets over. The Centre now expects these states to find alternative sources of revenue.

Only a few North-eastern states have been able to wipe out the deficit so far. In case of Punjab, 25 per cent of its 2015/16 revenue came from agriculture purchase tax and infrastructure development tax. These got subsumed in GST and, hence, the wide shortfall in GST collections. The Punjab finance minister says with the Centre wanting states to fend for themselves after the five-year compensation period, there is a need to rethink the design of GST. He says maybe it is time for GST 2.0.