The 15th anniversary of BT Pro-Am of Champions draws an impressive CEO crowd in Bangalore.

Carl Dujardin, CEO of Xsysys, started his game with hope at the Eagleton golf course in Bangalore on November 21. The sky was unusually clear over the city, which, until some 48 hours ago, had received copious rainfall. When Carl teed off from the 17th hole, his first shot landed the ball straight into water-one of those hurdles golfers have to surmount. His game seemed headed for disaster on a pitch he plays on every week when his tryst with the first hole ended in a bogey. 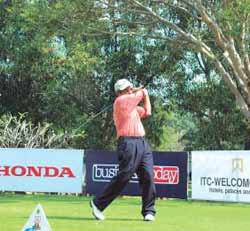 But when the Bangalore round of the Business Today-Honda Pro-Am of Champions 2010 was over after some four hours, Carl was among the three winners in Individual category (Handicap 0-8). "It was a lucky day for me in spite of starting my first shot on the 17th par three hole in the water. I did hit more fairways than I normally do. I missed 4 or 5 fairways today, but still managed to hang on and recover from a difficult position. It was that 140-yard blind shot on the most difficult-10th hole-that saved the day for me, the ball landed three feet from the pin," he said, still trying to come to terms with the reality of his win.

Not quite lucky this time was Shankar Suryanarayanan, Chief Marketing Officer at the Landmark Group, who won in the Individual category last year and played the finals in Delhi. This time, too, he enjoyed his game to the fullest and was lavish in his praise for the nearperfect conduct of the BT-Honda Pro-Am event. Indeed, CEOs have often commented that they eagerly await the event and feel privileged to be invited. Such universal appreciation for the annual indicates just how the event has carved a niche for itself over the past 15 years. The event drew an impressive turnout of the Who's Who of the Bangalore corporate world to Eagleton, a picturesque golf resort off the Bangalore-Mysore highway. B. Ashok, CEO, WEP Solutions, tees off. He is part of the winning team.

The BT Pro-Am of Champions, India's only stand-alone Pro-Am golf event, which began in 1995, has established itself as the premier Pro-Am in the country. "It was very well organised and I am privileged to be part of the event," said Sukhi Malhotra, Chief Manager at Tata Tea, whose game was "a little erratic, with sparks of brilliance." For B. Ashwin, Chief Operating Officer (COO) at ING Life Insurance, it was a "string of pleasurable moments in the company of fellow golfers." "The whole idea is not to come here and win, but meeting new and like-minded people. If you win at the end of the day, that's a bonus," said Ashwin.

In all, 82 select golfers made best of the Pro-Am event to indulge in a bit of serious golfing in an atmosphere of camaraderie and light-hearted banter.

The other two winners in Individual category were: David D'Souza, MD of Garden City Fashions, and B.K. Satish, proprietor of Business Point, in Handicap 0-8 and Handicap 9-16 categories, respectively.

The three winners in the Individual Handicap category received a handcrafted timepiece from Edox, sponsored by Ethos Summit (official time keeper for the event). They will also participate in the finals to be held in Delhi on March 27-28, 2010. Besides, the seven winners from both Individual and Team categories will also get a three-day and two-night stay at The Venetian Macao Resort Hotel - one of Asia's entertainment hot spots.