The bitter fight between the two founders of IndiGo began in last October, when both sides started firing letters addressed to the company board accusing each other of mala fide intentions

Once bitten, twice shy. Back in 1991, Rahul Bhatia, the co-founder of low-cost carrier IndiGo, was involved in his father's airline agency Delhi Express when his father's partners - about nine of them - acquired majority control in the company. Bhatia and his father left the company. The incident may have played its role in structuring the InterGlobe Aviation's shareholder agreement-all heavily loaded in favour of Bhatia.

The clauses of the agreement are now at the centre of a bitter feud between Rakesh Gangwal, the other co-founder at IndiGo, and Bhatia over control of the airline they founded 14 years ago with a single aircraft.

Friends turned business partners who went on to establish Asia's largest carrier, the story of Gangwal and Bhatia could well be a movie script. The bitter fight between the two started around last year - at least that's what the Gangwal's recent letter to SEBI (Securities and Exchange Board of India) has highlighted. Beginning last October, both sides started firing letters addressed to the company board accusing each other of mala fide intentions. 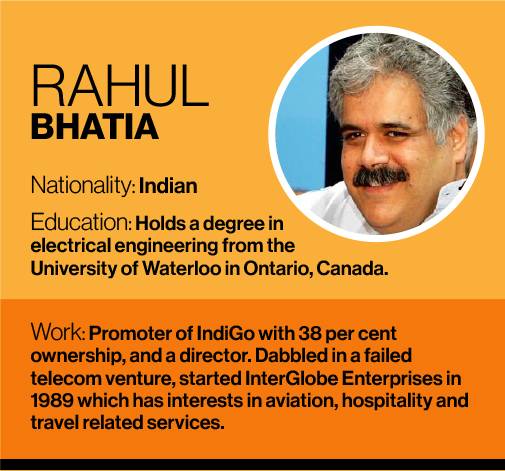 In one such letter dated January 30, Bhatia said that it is Gangwal's sheer greed to hijack the company and grab rights, which the RG Group (the Gangwal and his affiliates) currently does not enjoy, that is motivating this action. In an another letter this June, Bhatia said that "the genesis of Gangwal's angst lies elsewhere - the refusal of the IGE Group to succumb to his unreasonable demands to dilute the IGE Group's [the Rahul Bhatia and his affiliates] controlling rights... the real objective of the RG Group is neither to investigate RPTs [related party transactions] nor to seriously think about developing "robust procedures". It is to dilute the control of the IGE Group and... indeed to malign the image and reputation of the IGE Group." 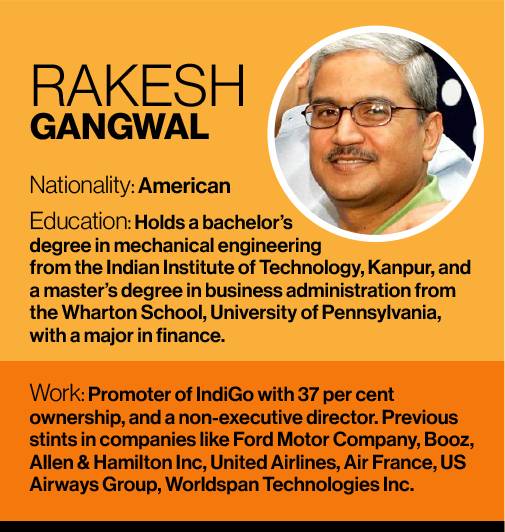 Their friendship dates back to 1985 when the two had first met at the Chicago headquarters of United Airways where Gangwal worked for 10 years - even working alongside IndiGo's current CEO Ronojoy Dutta which Gangwal says is Bhatia's man - before moving on to other assignments in Air France and US Airways Group (where he was chief executive and chairman). Bhatia, on the other hand, was doing well with InterGlobe Aviation which has interests in travel, transportation and hospitality space.

It was Bhatia's itchy feet that got them both into the aviation sector which is known for its high failure rates, globally. Gangwal was initially reluctant to start an airline but Bhatia's persistence and the strong bonding between them convinced Gangwal. IndiGo was born with both partners owning 50 per cent stake each.

At IndiGo, the arrangement between Bhatia and Gangwal was demarcated. Bhatia would bring a bulk of the capital, networking skills and political connections. Gangwal would use his 20-plus years of aviation expertise to take care of aircraft and related acquisitions, design airline's network, and other handle operational issues.

At the beginning, Bhatia's IGE Group took the economic risk of over Rs 1,100 crore (almost six times its contractual obligation), and sweeping rights to appoint three out of six directors of IndiGo, chairman of the board, managing director, CEO, and president.

Gangwal, in return, gave a fantastic start to IndiGo by cracking a highly-profitable 100-aircraft deal with French aircraft maker Airbus in the 2005 Paris Air Show. Airbus' rival Boeing had captured 90 per cent of the Indian market at that time; Airbus was desperate to make it big in India, and Gangwal knew it too well. Every aircraft brought about $4-5 million profits to the airline.

"Over the years, Bhatia has earned substantial money from these RPTs which have perhaps more than compensated him for his higher investment in IndiGo than Gangwal. Gangwal seems to have realised that it's time that their rights should be equal," says an aviation consultant.

Even though Gangwal denies it, Bhatia camp has been accusing RG Group of gaining control over the airline. "The script of the play stands exposed even more starkly as Gangwal makes innocent fig leaf statements of standing by and honouring the SHA [shareholders' agreement] and being a crusader of corporate governance," Bhatia said in a letter to the board.

Gangwal maintains that the fight germinates from lax corporate governance practices at IndiGo, and particularly the dubious RPTs between IndiGo and the companies personally owned by Bhatia. At present, IGE Group and IndiGo have RPTs in areas like real estate rentals, call centre services, simulator training facilities, general sales agents and crew accommodation at hotels. In 2017/18, these RPTs accounted for less than 1 per cent of the total consolidated turnover of the airline. Gangwal also raises objections on the EY audit which was set up to look into these allegations.

For now, the ball is in the SEBI's court which will have to take a call on how to deal with in a corporate battle which also involves alleged flouting of its guidelines.

"A public disagreement is not healthy for any company. I hope both factions sit down in private and resolve differences amicably before any serious damage is done to the morale of the company," says Devesh Agarwal, an aviation expert.

What has Gangwal alleged?

"Today, IndiGo is at a watershed moment. It has started veering off from the core principles and values of governance that made IndiGo what it is today."

"We recognize that there are influential and powerful people on the Company's Board who will use their position to influence the outcome of the campaign that the RG Group has embarked upon."

"This is a landmark issue and SEBI has the ability to send a clear message to all errant companies to adhere to the spirit and intent of the regulations."

What was Bhatia's response?

"The genesis of Mr. Gangwal's angst lies elsewhere - the refusal of the IGE Group to succumb to his unreasonable demands to dilute the IGE Group's controlling rights."

"It is sheer greed to hijack the company and grab rights, which the RG Group currently does not enjoy, that is motivating this action."

"The company will remain eternally grateful to Mr. Gangwal for having attempted to hold the company's business to ransom, as this paved the way for the company to institutionalize an area of operations which Mr. Gangwal had kept as his exclusive preserve."

Also Read: Email 'six minutes' before board meeting, other transgressions that led to the IndiGo blowout