Fossil ties up with the American tattoo artist Mr Cartoon for a new, wackier and wickeder chapter in watch wearing.

The individual has always had to struggle to keep from being overwhelmed by the tribe. If you try it, you will be lonely often, and sometimes frightened. But no price is too high to pay for the privilege of owning yourself'.

German philosopher Friedrich Nietzsche was right. Fortunately, expression isn't the only function that art serves, there's the greater question of asserting identity, at hand. While most cling on to conventional routes like music and literature to give wings to their thoughts, others tread the road less travelled. The latter are a bold sect, strong enough to stand up against stereotypes, often issued by those alien to the liberating concept of expressing differently. So, who's to say tattoo and graffiti arts don't merit a serious audience? Be it inserting a needle to leave a symbolic scar etched on skin forever or articulating a loaded narrative onto a subway wall, all is fair when the means is art, and the end, a bold assertion of identity.

In the harbour area of Los Angeles County, Mark Machado, or Mr Cartoon has been riding the crust of what is nonchalantly denounced as 'cultural perversion'. He began by airbrushing t-shirts and vintage lowrider cars when just eight and has since needled famous flesh belonging to stars like Eminem, 50 Cent and Justin Timberlake. The free will that he so effortlessly exerts has been captured and played out in the 2003 documentary Scarface: Origins of a Hip Hop Classic, which stars rappers like Ghostface Killah and Snoop Dogg. 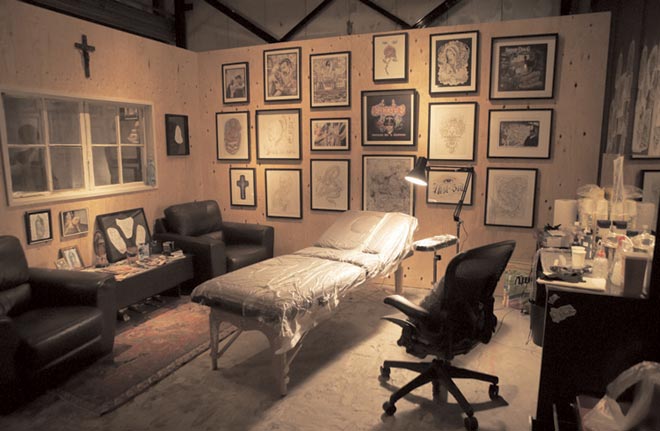 Through it, one gets an insight into the world of hip-hop and such was its veracity that actor Al Pacino confessed it taught him more about the rebellious sub-culture than his own 1983 film on the subject, Scarface.

Italian design brand Diesel, which has dressed young adults in seasoned jeans and rugged tan leather jackets for years, has now collaborated with Mr Cartoon to lend its latest collection of timepieces a unique idenity. Branded under Fossil, the two bold watches carry interpretations of Mr Cartoon's designs from his many murals and celebrity tattoos.

In keeping with Mr Cartoon's free spirit, Diesel launched them in Japan, where creativity seeks myriad expressions, through futuristic graphics and popular arts like manga and anime. Mr Cartoon's studio was recreated with a tattoo bed, guns and framed sepia-tinted images from his life's works at Tokyo's upmarket cafe Idol. Sepia-tinted images from the artist's life

Korean boy band Beast, best known for their album Fiction and Fact (2011), in their studs-and-spikes look, reflected the overriding punk theme that the watches also embodied. The brand relied on Mr Cartoon's ability to make a free style art precise to each stroke; a virtue they feel lends an unusual creativity to both their watches, which are designed for young-hip-casual watch wearers. The DZMC0001 is a three-hand analogue which features the artist's signature clown face. Based on his hand-drawn design, the clown is carved in silver alongside red accented time and date counters on a black dial. There are custom engravings on the side of the case and embossed stencilling on the black silicon band. Mr Cartoon has also revisited Diesel's famous Mohican logo on its stainless steel back.

The other model, DMZC0002, has a more macho appeal. The olive dial displays the artist's interpretation of Roman numerals and his calligraphic 'C' logo. The silicone band is also olive and has custom stencilling. This chronograph comes with an LED light display function, and is water resistant to 5 ATM. While the former is laminated with brushed and polished gunmetal, the latter is rugged and set in ionised matte gunmetal which looks masculine.

A tattoo's permanence and tangibility give a structure to human sentiment, be it a strong love bond or an extreme ideology. Fossil unleashes the same confidence through its timepieces and gives the peripheral art of tattooing a more mainstream drift.
Get latest news & live updates on the go on your phone with our News App. Download The Business Today news app on your device
More from BT MORE