Data Leak Market on Thursday claimed that a database carrying the details of COVID-19 vaccinated people in India was on sale for or $800.

A website on Thursday claimed that the data of 150 million vaccinated Indians have been leaked on the dark web. However, the Health Ministry and security researchers denied the data breach but said that they are getting the matter investigated. CoWin platform is used to book a slot for COVID-19 vaccination. The website requires users to submit their Aadhar card or any government-issued ID card, their phone number and location to book a slot. The report claimed that the phone numbers, Aadhar card details of 150 million were leaked.

Data Leak Market on Thursday claimed that a database carrying the details of COVID-19 vaccinated people in India was on sale for or $800. The data that was allegedly leaked included the name, Aadhaar number, location and phone number of people who have registered for the vaccine. The website claimed that it is not the original leaker of data, it is a reseller.

However, the health ministry and security researcher Rajshekhar Rajaria soon refuted the claims of the data leak market. "Our attention has been drawn towards the news circulating on social media about the alleged hacking of Co-WIN system. In this connection we wish to state that Co-WIN stores all the vaccination data in a safe and secure digital environment. No Co-WIN data is shared with any entity outside the Co-WIN environment. The data is claimed as having been leaked such as geo-location of beneficiaries is not even collected at Co-WIN. The news prima facie appears to be fake. However, we have asked the Computer Emergency Response Team of MeitY to investigate the issue," RS Sharma, who heads the Co-WIN portal, said in a statement.

However, the health ministry also said that they are investigating the matter.

Rajaria, a security researcher, who has unearthed many data breaches involving popular companies said that the website claiming CoWin data leak is absolutely fake. Sharing the screenshots of the fake website, Rajaharia wrote, "Cowin Portal Not Hacked!! Some Fake #DarkwebLeakMarket are claiming to sell data of 150 Million COVID19 Vaccinated People of India. It's completely fake. It's a Bitcoin Scam. Don't Trust. Check Screenshots. They are listing fake leaks." 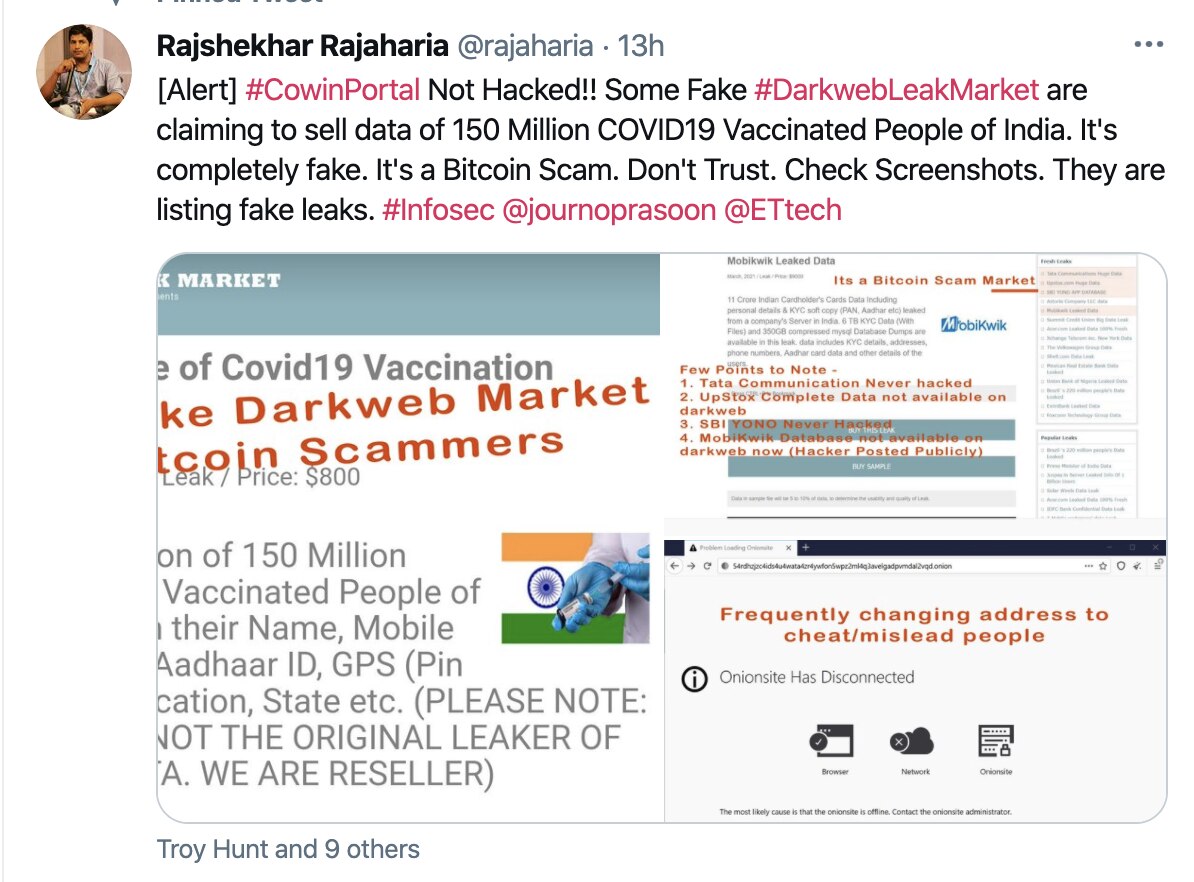