Sandeep Upadhyay, MD (Infrastructure Advisory) Centrum Capital expects the disruption could be limited to two-three months and that investor sentiment in the sector from a longer term perspective would remain positive

Faced with a sharp drop in toll collection following a nationwide lockdown in the country in the wake of coronavirus outbreak, private highway developers such as Ashoka Buildcon and IRB Infrastructure are likely to invoke force majeure clause in their concession agreement to seek compensation from the government.

They would also seek moratorium on loan repayment to banks and extending the financial year closure timeline by at least three months to tide over the crisis triggered by a surge in Covid-19 cases. The private highway developers have seen toll collection falling in the range of 50-80 per cent as most passenger vehicles have gone off road. 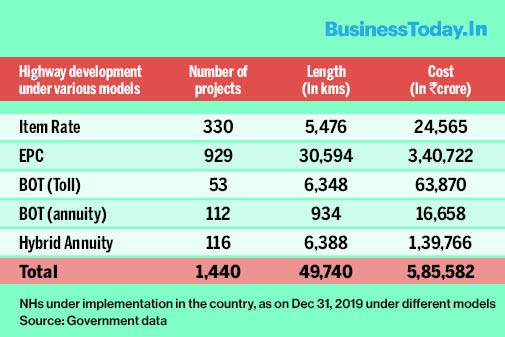 Physical work in the sector has also taken a severe hit amid the lockdown. However, some developers have continued paying wages and salaries of the staff even as the work has halted, they inform Business Today.

"Most of the concession agreements do provide compensation in terms of period if there is forced closure for more than seven days. For financial closure of new projects we would ask for suitable extension of three months. Currently the available time for financial closure is five months," said Satish Parakh, Managing Director, Ashoka Buildcon.

Parakh added that the government will have to increase spending to stabilise the economy and also come out with some relief package for the sector even though he hoped the disruption would not be as bad as being seen.

Notably, national highway projects worth Rs 5.85 lakh crore were underway as on December, 2019 under various models such as Build, operate, transfer (BOT) toll and hybrid annuity.

As per a written reply in the Lok Sabha, the total revenue generated from toll plazas during the financial year 2018-19 came in at Rs 9,187 crore. Further, total revenue from toll-operate-transfer projects (upfront payment for 30 years) stood at Rs 9,681 crore.

Sandeep Upadhyay, MD (Infrastructure Advisory) Centrum Capital expects the disruption could be limited to two-three months and that investor sentiment in the sector from a longer term perspective would remain positive.

"If you are investing in infrastructure sector, you are expected to meet your IRR (internal rate of return) criteria over next 10-15 years. From that point of view, I do not see long term investors or the likes of pension funds and sovereign funds to be clouded by a negative sentiment due to current disruption. But what is bound to happen is the adverse impact on traffic and hence the revenue projections on toll roads will take an immediate hit. Because of the downward trend we are likely to see in the economy, there may be deferment of some new projects in the near future," he said.

The government had awarded road projects having a length of about 3,434 kms in financial year 2019-20. By December 2019, 6,940 kms length of highways had already been constructed.

In what shows a little slowdown, the average rate of construction in financial year 2019-20 till December 2019 stood at 25.24 kms per day.