Not often does an acquired company give the acquirer a run for its money in the market. This case study looks at how Punjab Tractors Ltd, which was hardly in the best of shape when Mahindra & Mahindra acquired it in 2007, was turned around, and today does exactly that.

Executive Summary: Not often does an acquired company give the acquirer a run for its money in the market. This case study looks at how Punjab Tractors Ltd, which was hardly in the best of shape when Mahindra & Mahindra acquired it in 2007, was turned around, and today does exactly that.

When Mahindra & Mahindra (M&M) acquired Punjab Tractors Ltd (PTL) for Rs 1,489 crore in March 2007, the latter was a pale shadow of its former robust self. Once the country's most profitable tractor company, with its 'Swaraj' brand renowned throughout north India, PTL had suffered due to poor management, which had reduced it from being the second biggest player in the industry at the turn of the century to fifth place. Its share price had also dropped from around Rs 1,000 to about Rs 250 in the same period. Started in 1970, with the Punjab government as the majority shareholder, PTL began floundering after 2003 as the state government tried to divest its shareholding. 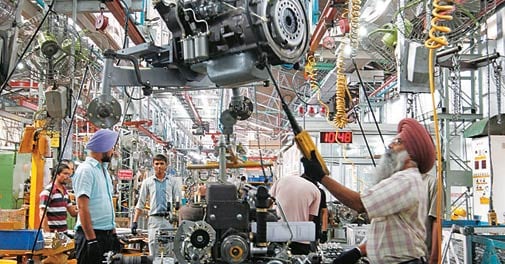 Even so, the buy made sense for M&M. In 2005, its number one position in the industry had been threatened for the first time. That was the year when, in May, Chennai-based Tractor and Farm Equipment (TAFE ) bought Eicher Motors's tractor division, increasing its market share to 22 per cent. This brought TAFE, whose earlier market share was just 14 per cent, within striking distance of M&M, whose share was 31 per cent. The acquisition also gave TAFE an entry into northern markets such as Punjab, Uttar Pradesh and Himachal Pradesh, which account for a third of all tractor sales. M&M needed to increase its lead and it did so by buying out PTL, raising its market share to 40 per cent. Besides, PTL, like Eicher, was strong in the North and would thus complement M&M's strong presence in the West and South. But only provided M&M restored it to its former health and integrated it successfully into its fold.

The man assigned this challenging task was Bishwambhar Mishra, who at the time was heading M&M's operations in China, but was brought back as PTL's managing director in July 2007. The first crucial step he took was to commission an external agency to find out what was wrong with the company by interviewing its 300-odd employees, who spoke out freely. They said PTL had neither a vision nor a long-term plan; decision making was slow and invariably top down; production was not marketlinked; and no major investments in product development had been made in recent years. "The outcome was revealing. The employees did not pull their punches," says Mishra, who now heads M&M's tractor and farm mechanisation business, and is a member of the company's Global Executive Board, which includes more than 20 of its top managers.

M&M's Swaraj Division management team (left) - including Bishwambhar Mishra (seated on the nose of the tractor), Pramod Lamba (on the front wheel), Jatinder S. Chawla (on the rear wheel) and Harish Chavan (third from the right, seated on the tractor) - with colleagues Photo: Shekhar Ghosh

And what did the employees want? They sought a clear vision of the company's future, a major thrust towards product development, as well as large scale training, skill development and better welfare measures for themselves. Interestingly, employees themselves suggested the overbearing labour union needed to be tamed. "The exercise gave us insights into what was wrong and more importantly, how we should go about setting things right," adds Mishra.

Vision was the most important and the new management began by creating one. But it was not imposed arbitrarily. "We set up a 'Vision and Mission' workshop comprising 60 employees across functions to debate and arrive at a vision," says Pramod Lamba, Vice President, Human Resources, M&M's farm equipment business. The vision was given a name Nayi Manzil (new destination), which was to make Swaraj one of the top two tractor brands in the country.

An important shorter goal was also set, called '3-2-3' - in three years, the revenue should double and the profits, treble. Just how this would be achieved was also laid down in a document called Nayi Disha (new direction). Its overall thrust was to make PTL an innovation-led, customer driven, performance-centric organisation with a participative management culture.

But more immediate details also had to be taken care of. Mishra launched what he calls 'health drivers'. PTL was in a financial mess. Though it was still profitable when M&M took it over, it had a huge inventory of unsold stock while out of its total sales of Rs 969 crore that year, Rs 600 crore had yet to be collected.

"The first six months were spent liquidating stock, improving collections and securitisation of debt," says Mishra. He set up a Swaraj Leadership Team consisting of himself and all the other functional heads to take major decisions quickly. Similar leadership teams were set up for each division as well. "These moves ensured participatory management, which PTL had earlier lacked," says Lamba.

The initial problems tackled, 'growth drivers' were launched in early 2008. The sales division was remodelled and dealerships extended. A brand building exercise began with a flurry of TV advertisements, backed by retail finance, tied up with Mahindra Finance. This made a big difference since 90 per cent of tractors are sold on credit. Productivity and quality improvement targets were set. PTL was finally merged into M&M and became its 'Swaraj Division' in 2008/09. Product development too followed.

Whatever its other failings, PTL always possessed a culture of innovation. "It knew how to design tractors in the most cost effective way," says Harish Chavan, who currently heads Swaraj division. "Swaraj products were rugged and known for their durability. As competitors we at M&M always benchmarked ourselves against PTL when it came to frugal engineering." The new management built on these strengths. "We identified product gaps and invested Rs 800 crore in R&D," says Mishra. Global expertise was sought if required. "We worked with engineering group AVL Austria to upgrade the Swaraj engine to improve fuel efficiency and meet new emission norms," says Jatinder S. Chawla, Senior General Manager, R&D, Swaraj division. "The fit and finish of the tractors - a chink in Swaraj's armour earlier - was refined. Two new products were launched in 2009 and 2010 after a gap of many years." A worker fixes a tyre.

It was not all smooth sailing. The PTL union, used to having its way with the earlier management, resisted the push for greater discipline and higher productivity by resorting to a 'go-slow'. But the new men in charge had provided plenty of carrots along with the stick and soon the union had no choice but to relent.

"Soon after the acquisition the management rolled out many benefits which were beyond the expectations of the employees," says Lamba, the HR VP. Salaries were raised to align them with those in the market, medical benefits were improved, the canteen was refurbished, greater safety measures were introduced and higher involvement of employees' families with the workplace was encouraged.

"On the one hand we ruthlessly demanded performance, but on the other we showed our human side too," adds Lamba. And where does the Swaraj division stand today? Production has risen to 69,292 units in 2011/12 from 28,500 in 2007/08 when the acquisition took place. Standalone revenue has more than trebled in these four years, to around Rs 3,000 crore from Rs 969 crore, while profit has risen more than six times to over Rs 500 crore from Rs 80 crore. Swaraj, with a market share of 13.1 per cent now ranks No.3, behind only M&Mbadged tractors itself and TAFE. The combined market share of M&M and Swaraj is a formidable 42 per cent.

By 2009/10, M&M had recovered its investment in Swaraj. Indeed, in many tractor markets, Swaraj is now M&M'S closest competitor.

Get latest news & live updates on the go on your phone with our News App. Download The Business Today news app on your device
Add Comment +
More from Case Study