The Budget often changes the investing arena and offers an opportunity to review your portfolio. A few experts tell Rahul Oberoi their recommendations.

The Budget often changes the investing arena and offers an opportunity to review your portfolio. A few experts tell Rahul Oberoi their recommendations.

"We do not expect a major impact on the markets in the near term."
Dipen Shah
Senior Vice-President (Private Client Group Research), Kotak Securities 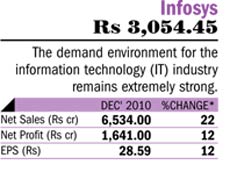 The budget is largely in line with expectations. While there was no rise in excise duty, as was feared, the concern on fiscal deficit will likely get resolved during the year. Thus, we do not expect any major impact on the markets in the near term. Over the medium to long term, implementation of proposals, reforms and positive action on subsidy (from fiscal deficit perspective) will be positive triggers.

Valuations based on 2011-12 earnings are reasonable and leave scope for gains. Thus, we see largely range-bound markets in the near-term and moderate gains in the next six to twelve months. 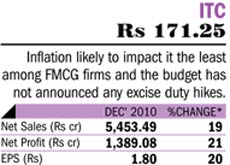 The budget has been a balancing exercise in ensuring fiscal consolidation against the backdrop of rising crude oil prices, inflation and a high current account deficit. Foreign direct investment in retail and insurance was not addressed either.

The budget is beneficial for the auto sector, PSU banks and financial firms but could be negative for iron ore miners and cement players. The markets have reached an intermediate bottom and are likely to trade with a positive bias, in a range of 5,200 (Nifty) on the downside and 5,650 on the upside. 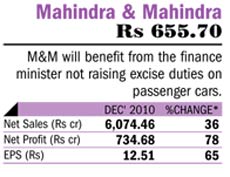 The focus of Budget 2011 was on pending legislative reforms. The finance minister has his eyes set on implementing the Direct Taxes Code and the Goods and Services Tax from 1 April, 2012. These reforms, if implemented, may go down as one of the biggest and influential ones since the delicensing of industries.

Pranab Mukherjee has tried to contain expenditure growth while maintaining the GDP growth estimate at 9% in 2011-12. Although the subsidy provision is underestimated, particularly with crude prices at over $110 already, the finance minister's efforts to contain the fiscal deficit at below 5% cannot be overlooked or ignored.

Corporate earnings will be dependent on the growth in real GDP. If we get a growth of over 8% this fiscal, posting an earnings growth of about 20% will not be a difficult task. The markets will eventually take a view on the quality of earnings and the discount rate. There were some surprises as well. The proposal to allow foreigners, who satisfy the know-your-customer (KYC) norms, to invest in mutual fund equity schemes has really come out of the minister's hat.

We estimate divergence in the estimates for the broad categories of revenue and expenditure numbers. On the revenue side, an assumption of 18% growth in tax revenue may not be very aggressive, given that we have seen a growth of 23% in 2010-11. 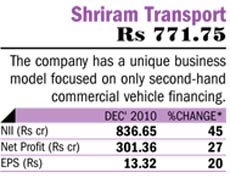 On the capital receipts side, a target of Rs 400 billion for divestment seems a little bit of a stretch, especially since we could only generate Rs 22,700 crore in good market conditions in 2010-11. In addition, the government has also budgeted for Rs 15,000 crore as onetime excess spectrum revenue.

On the expenditure side, there is a likely understatement to the extent that subsidies are not fully accounted for. While the budget for petroleum subsidy for 2011-12 is only Rs 23,600 crore, we believe that this amount is likely to increase to Rs 35,000-40,000 crore.

The government has budgeted for a net borrowing amount of Rs 3.43 lakh crore for 2011-12. While the bond market may initially respond positively to the significantly lower than consensus estimate, we need to be more pragmatic about the actual amount that may be raised through supplementary demands.
Get latest news & live updates on the go on your phone with our News App. Download The Business Today news app on your device
More from Stocks