At a recent Moet Hennessy dinner at The Oberoi, Delhi, about 15 guests were introduced to its new Champagne, the Dom Perignon Plenitude 2. The new and old Champagnes of the company were paired with Oscietra caviar, Scottish salmon ceviche, lamb loin, Parmesan cheese tortelleni, braised Cochin lobster tail, and single origin chocolate cream.

Champagne used to be a celebratory wine - the sort to mark success. It has now quietly evolved into being paired with food in many countries. India may just be warming up to this idea.

Moet Hennessy, which is part of the luxury group Moet Hennessy Louis Vuitton (LVMH), has been evaluating the growth of Champagne in the Indian market. "According to what I have understood from the team in India, Champagne is still seen as a celebratory wine although in recent years, the popularity and interest in food and wine pairings have increased and taken on new connotations," says Vincent Chaperon, Dom Perignon's Chef de Cave (head winemaker). "Industries have sprung up with print publications and media dedicated to expounding on the principles and ideals of pairing the perfect wine/ bubbly with the perfect dish. In the restaurant industry, there is often a dedicated individual or staff of sommeliers who are trained to recommend such pairings with the restaurant's fare," he adds.

The Indian market for Champagne is growing consistently from a smaller base but it hasn't been easy for marketers. "The brand team in India has noticed a recently emerging, important market for wines and Champagne. Although most consumers, even today, turn to whiskey and rum, the increasing availability of Champagne over the last decade has spawned significant interest. Rapid and widespread urbanisation, the need to experience more, the curiosity in flavours and the aspirational value of Champagne attracts Indian consumers," Chaperon says.

What is the Champagne market in India like? If you toss the question to Rajiv Singhal, the Ambassador of Champagne in India, he would tell you that around 1998, India consumed just about 20,000 bottles. When he started promoting Champagnes in 2005, the market had grown to 116,000 bottles. By 2018, consumption expanded nearly four times to 400,000 bottles. Delhi and Mumbai consume the most, nearly 80 per cent of the overall pie. About 20 Champagne brands are imported into India. Apart from Moet Hennessy, other producers available in India include Taittinger, Devaux, Drappier, Bollinger, Louis Roederer, Lanson, Nicolas Feuillatte, Billecart-Salmon, and Laurent-Perrier.

"Around 2005, the biggest challenge in selling Champagne was that everyone understood Champagne as anything that had bubbles in it. A lot of people would say they didn't like Champagne but in reality they had been drinking sparkling wine," Singhal says. Champagne can only be produced from grapes grown in the Champagne region of France. Not only is Champagne about the region, it is also about the process of making it, the bottle (distinct shape and colour), the cork, and what is written on the label.

As the ambassador, Singhal had a dual task - to promote and to protect the Champagne appellation against misuse. 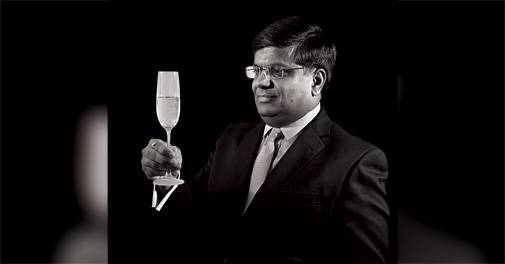 Over the years, he has used persuasion, and at times the law, to handle violations. For instance, a company in India was selling fruit juice and calling it 'Champagne-style'. "We got an injunction from the Delhi High Court to destroy the material," Singhal says. Beer makers were violators too, saying the beer had 'Champagne bubbles' or was made with 'Champagne yeast'. "The word 'Champagne' is used loosely. You can't have Champagne coffee or flavoured Champagnes. There was misuse on wine lists as well. Some restaurants list Italian sparkling wines under Champagne. We have got their lists corrected."

Therefore, a large part of marketing the wine had to do with educating those in the trade or in the restaurants and hotels that would sell Champagne.

"I did a good job," Singhal says with a laugh. "As we empowered the customer with more information, we were able to better capture their interest. It is a luxury product and had to be sold like one. It is the safest luxury product to have in your consumption set. You can never go wrong with Champagne. If you wanted to gift somebody, a bottle of Champagne will always bring you a big thank you," he adds.

champagne is a luxury product also because of its price, which can be as high as Rs 1 lakh a bottle. The Dom Perignon Plenitude 2, available in a few luxury hotels in Delhi and Mumbai, costs between Rs 63,474 and Rs 71,970. What makes Champagnes this expensive?

First, winemakers have to deal with climate change, which impacts vines and harvest time. "Climate change has been observed in Champagne since the end of the 1980s. With warmer temperatures, the vine cycle has been shorter and we've been harvesting earlier," says Chaperon, Dom Perignon's Chef de Cave. "Till today, impact on quality of grapes and wine has been positive. Higher maturity and concentration of the grapes; less Botrytis (a fungus that affects plants) pressure. Yet, ecosystem and parameters are changing and we need to adapt," he adds, explaining that the company offers only vintage wine and can only be produced from the grapes of a single year. "It takes no fewer than eight years of patient elaboration to reach its aesthetic ideal. For each vintage and from its inception, a limited number of bottles are set aside in the cellars, for longer maturation. With this extra time, the inner activity in the bottle increases. After close to 15 years, the expansion of energy reaches its peak," Chaperon explains.

He proceeds to explain what happens after 15 years in part poetic, part abstract terms. "Elevated to new heights, it unfurls across every dimension - wider, deeper, longer, more intense - and is gifted further with a new, extended longevity. It is precise, intense, vibrant." A sip of Champagne would make this clear.