Fine wines and whiskies do not just enrich your evenings. They can also make you rich.

Wearing a steel grey Canali suit, a Cartier on his wrist, a pair of Ferragamos on his feet, Sandeep Arora sits discussing whiskies with a friend at the Gurgaon Golf Club. Arora is a whisky professional, head of Spiritual Luxury Living, a whisky advisory firm; both he and his friend, a financial consultant who did not want to be named - are vintage whisky collectors. Arora mentions a bottle of Highland Park single malt Scotch he had picked up. "It's awesome, just like the Balvenie 1972 we enjoyed some time back," he says, naming another highly prized brand. The friend responds in kind. "On my way back from Europe I picked an Ardbeg Uigeadail," he says, naming another prized single malt whisky, brewed in Scotland's southernmost island of Islay.

VIDEO:How to invest in wine 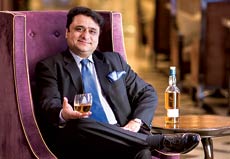 Sandeep Arora, Director, Spiritual Luxury Living, invested in a cask of the single malt Bruichladdich in 2009, which will mature only in 2019

Such conversations are being increasingly heard as the number of whisky connoisseurs in the country - albeit, still only a handful - grow. And some of these connoisseurs have also realised that the right kind of whisky is also an excellent investment option. Ever heard of Dalmore, 1926 vintage? Between 2008 and 2011, its price rose 450 per cent to Rs 4.7 lakh a bottle. Or of Macallan 1938, which saw a 425 per cent price increase to Rs 1.8 lakh a bottle in the same period? Or of Balvenie 1937, which is up 344 per cent to Rs 10.28 lakh a bottle? The top 10 vintage whisky brands on average appreciated 402 per cent in the three years. In comparison, gold prices rose just 146 per cent.

Nor is whisky the only spirit worth investing in. Vintage wine prices may not have seen the spectacular spikes some whiskies have lately, but they too have climbed, especially of those from France's Bordeaux region, the world's wine industry capital. The cost of a bottle of Chateau Lafite Rothschild - for years on the top 10 list of traded wines - jumped 22 per cent in 2011.

The Chateau Haut-Brion's price rose 25.6 per cent and the Chateau Latour's 22.4 per cent in the same year. The average customer picks up his Scotch from the nearest spirits' store. Investors do so too, but many do the bulk of their buying directly from breweries, distilleries or at global auctions. Scotch brewers usually sell their stock years before it matures, and the difference in price, if whisky is bought while it is still being brewed, can be considerable.

Arora, for instance, invested in a cask of the single malt Bruichladdich - a cask fills 300-350 bottles - in 2009, which will mature only in 2019. "I expect its value to appreciate considerably," he says, though he refuses to discuss figures.

The key to investing in wine is to choose the right year. The price of some wines from the year 2000 has already appreciated 600%"

When he learnt of Arora's investment, his financial consultant friend too promptly followed suit. "Investing in whisky has not yet taken off in India, but it may well do so in the future," says Avishek Das, Senior General Manager, Marketing, United Spirits Ltd.

It is the brewery that is all important while investing in whiskies. Those from Ardbeg and Macallan, as well as from Glendfiddich, Port Ellen and Bowmore - all Scotland-based - are investor favourites.

Many also invest in whisky brands of breweries that have closed down, since there will only be a limited number of such bottles. Again, breweries often prepare only a limited number of certain whisky brands: these 'limited edition' bottles are also good investments. There is, for instance, the Dalmore 62, of which only 12 bottles were made, each one of which currently costs Pound 1,25,000 (Rs 1.6 crore). The success of this brand spurred the brewer to produce Dalmore 64 Trinitas, of which - as the name indicates - there are only three bottles, each bought for Pound 1,20,000. Curiously, while only a few living in India care about such premium brands, Indians abroad recognise their worth a lot more. Two of the three Trinitas are owned by NRIs, Sukhinder Singh and Mahesh Patel.

Fine wines are not for people who do not understand the finer things of life," says Sonal Holland, a Mumbai-based wine investment advisor. One of those she advises is her husband, British national Andrew Holland, currently the Mumbai-based CEO of investment firm Ambit Capital.

Though he knows little about wines, Andrew has begun investing in it, buying a sizeable quantity of the 2009 and 2010 vintage at his wife's urging. He is satisfied with the results. "They have given me 15 per cent returns so far," he says. But this is just the beginning. As more years go by, the value will keep jumping higher and higher. The price of some wines from the year 2000 has already risen 600 per cent. The key to investing in wine is to choose the right vintage: the quality of the grape harvest varies every year. "In the first decade of the 21st century, for instance, the best years were 2009 and 2010," says Sonal. Unlike whiskies, fine wines have their own global exchange, the London International Vintners Exchange, or Liv-Ex, set up in 1999. The most traded brand on it is the Lafite, which currently costs around Rs 80,000 a bottle while still in the barrel. "When it matures, 10 to 12 years later it will be much more expensive," says Sonal. The top 10 wine labels provided returns varying from 14 to 38 per cent returns in 2011. The best returns are obtained by investing when the vintage wine auctions are held, where prices are at their lowest.

Indian investors in wine, however, face two problems. They cannot take delivery of the wine early, before it has matured, as the tropical climate prevents proper maturing. Costs naturally escalate if the distillery has to store the wine. Again, the maximum Indians are allowed to invest outside the country is $200,000 (Rs 1.1 crore) which imposes its own constraints. How much is a reasonable amount to put in? "A minimum investment should be around Rs 10 to 15 lakh, a moderate one around Rs 30 to 40 lakh and a good investment portfolio should put in more than Rs 50 lakh," says Sonal. A higher investment in a range of wines enables the investor to cover his risks in case particular brands fail to do well in a particular year.

Investing in liquor is thus only for the wellheeled. And it helps if you are a connoisseur as well. Both Arora and Hollands enjoy their drinks.
Get latest news & live updates on the go on your phone with our News App. Download The Business Today news app on your device