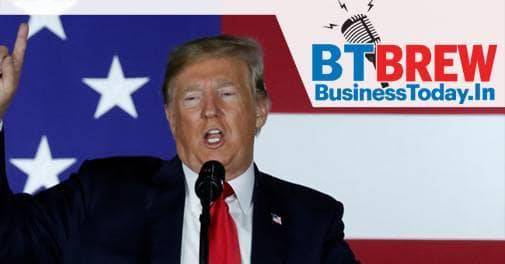 Trump's proposal on immigration policy may benefit Indian green card aspirants
In a major policy speech Thursday, US President Donald Trump is all set to announce a new proposal to overhaul the country's immigration policy that would give preference to foreigners based on merit rather than the existing system that gives preference to family ties, a move that could end the agonising Green Card wait for hundreds and thousands of Indian professionals. Brainchild of Trump's son-in-law, Jared Kushner, the new plan primarily focusses on strengthening border security and revamping the system of Green Card.

US blacklists Huawei, places it on entity list
Escalating the bruising trade war with China, President Donald Trump has signed an executive order barring American companies from installing the foreign-made telecom equipment deemed a national security threat, a move apparently aimed at banning Chinese giant Huawei from US networks. The decision taken on Wednesday risks escalating tensions with China as the world's two largest economies clash over whether Huawei. Under the order that will take effect in the coming days, Huawei will need a US government license to buy American technology.

World leaders, tech execs pledge to curb online violence
A dozen countries and global tech giants including Facebook, Google and Twitter pledged Wednesday to find ways to keep internet platforms from being used to spread hate, organize extremist groups and broadcast terror attacks. World leaders led by French President Emmanuel Macron and tech executives gathered in Paris to compile a set of guidelines dubbed the "Christchurch Call to Action.". Part of the attack in New Zealand had been broadcast live on Facebook, drawing public outrage and fueling the debate on how to better regulate social media.

Jet Airways crisis: Qatar Airways seeks addition of seats on flights to India
Qatar Airways has asked the Indian authorities to allow them to increase the number of seats on their flights to India. Qatar Airways has sought the addition of more seats on high volume routes such as Mumbai, New Delhi and Bangalore. The arrangement has been requested on a temporary basis and without formal changes to the existing weekly seat capacity entitlement under the 2009 Qatar-India bilateral aviation framework.

Ola pumps $60 million into international unit to run Australia, UK operations
Homegrown ride-hailing platform Ola revealed in its regulatory filings, sourced from Singapore's Accounting and Corporate Regulatory Authority, that it pumped in about $60 million in its international operations in the past 15 months. These tranches of funding will equip the cab aggregator to in its rivalry with the American giant, Uber in international markets including Australia, New Zealand and the UK.

IndiGo to start six new flights connecting Kolkata from July 20
IndiGo on Wednesday announced that it will start six new domestic flights to and from Kolkata from July 20. Moreover, the no-frills airline said it will start a third direct flight on Delhi-Kathmandu route from July 4. IndiGo is the country's largest carrier as it had 44.3 per cent share of the domestic passenger market in first quarter of 2019, according to DGCA data.