Centre to ask Flipkart, Amazon, others to disclose 'origin' 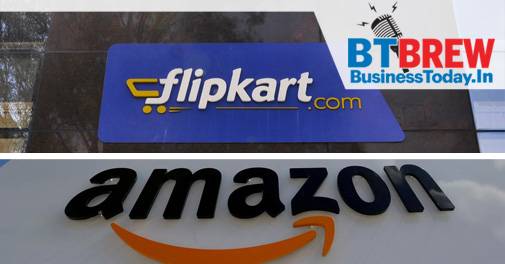 Centre to ask Flipkart, Amazon, others to disclose 'origin'
India is likely to demand online retailers like Amazon and Flipkart to display the country of origin against products listed on their e-commerce platforms. The move is part of India's policy measures targeting Chinese goods after recent border clashes. Display of country of origin is expected to influence consumer preference for locally-manufactured items as 'Boycott China' chorus grows louder.

Richest Indian Mukesh Ambani keeps annual salary capped at Rs 15 crore for 12th consecutive year
Richest Indian Mukesh Ambani has kept his annual salary from his flagship firm Reliance Industries capped at Rs 15 crore for 12th year on the trot in the fiscal ended March 31 and has thereafter decided to forego the entire remuneration in view of the Covid-19 pandemic. Ambani has kept salary, perquisites, allowances and commission together at Rs 15 crore since 2008-09, forgoing over Rs 24 crore per annum.

Coronavirus treatment: Patanjali submits 'Coronil' research documents to Ayush ministry
Ramdev's Patanjali Ayurved has submitted all crucial documents related to its coronavirus medicine 'Coronil' to the Ayush ministry after queries were raised on its claims that the medicine was "100% successful" in curing patients, India Today reported. The government on Tuesday asked the company to stop advertising such claims until the whole issue was duly examined.
HDFC pays 7.25% interest to raise Rs 4,000 crore from ICICI Bank, Axis Bank

200% rise in cyberattacks from China in a month; India tops hit list post Galwan face-off
The deadly fight between the Chinese and Indian military forces at the Galwan Valley has resulted in 200 per cent increase in cyberattacks from China towards India. Hacker groups in China are targeting Indian institutions like ministries, large businesses, and media organisations for attacks on their IT infrastructure. As per Cyfirma, a cyber threat intelligence firm, the conversation in the dark web expressing interest to hack Indian assets has increased substantially.

Working to complete contours of $15 billion Saudi Aramco deal, says Mukesh Ambani
Oil-to-telecom conglomerate Reliance Industries Ltd (RIL) on Tuesday said it is working to complete contours of a USD 15-billion deal with Saudi Aramco but did not give a timeline for its completion. Richest Indian Mukesh Ambani in August last year announced talks for sale of 20 per cent stake in the oil-to-chemical (O2C) business, which comprises its twin oil refineries at Jamnagar in Gujarat and petrochemical assets, to the world's largest oil exporter. The deal was to be concluded by March 2020 but has been delayed.

Shutting doors to others will not help India, CEA on 'Boycott China' sentiment
Amid the current anti-Chinese sentiment triggered by the Sino-India border tension and talks of an import substitution policy, Chief Economic Advisor Krishnamurthy V Subramanian has said shutting the doors to other countries will not help India. He said the country had followed the import-substitution model till 1991, and that approach has been discredited since. But he also added," I will not say that trade should continue with countries which are creating problems at the border."

India to impose 20% customs duty on solar equipment, more riders on imports from neighbouring nations
India is planning to impose a 20 per cent Basic Custom Duty (BCD) on solar modules, solar cells and solar inverters from August, with a view to discourage imports from China. Now solar equipment importers have to pay a 15 per cent safeguard duty (SGD), which is set to expire on July 29, 2020.