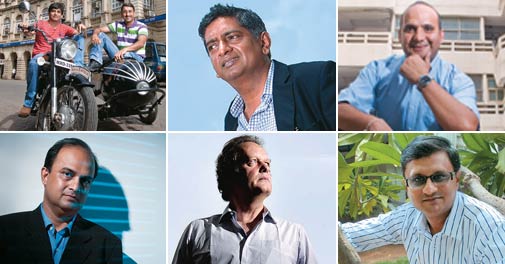 The rise of boutique investment banks

In an uncertain economy, Suveen K. Sinha unearths boutique investment banks which are proving better at sealing deals than the big ones. It is not just the lower expenses that make them click with clients. All six that BT spoke to insisted that their clients loved them because they were always there for the clients.

How to choose the right real estate agent

You cannot do without a real estate agent while searching for a home, but take care not to be misled by unscrupulous ones.

After its introduction last year, the Land Acquisition Bill was studied by a non-partisan parliamentary committee. Though its recommendations are not binding, support for legislation in Parliament requires the government of the day to bring the committee on board. Full coverage

The government is set to award more airport projects and is targeting Rs 50,000 crore in private sector investments by 2017. Full coverage

The coal crisis has caught the government and power developers unawares. No power developer is questioning the potential of the Indian market, but a great deal of scepticism has crept in. The only way it can be dispelled is by assuring developers of a steady supply of coal over the long-term.

Despite land and funding issues, roads are being built at a healthy pace. Business Today also takes a close look at other key areas - power, airports and land acquisition - that are critical to pull in $1 trillion in investments over the next five years. Full coverage

Business Today takes a close look at four key areas - highways, power, airports and land acquisition - that are critical to pull in $1 trillion in investments over the next five years. Full coverage

At Business Today, which by the way has confirmed its position as India's most-read business magazine and second-most-read business publication if you include all financial dailies and magazines, according to the latest Indian Readership Survey.

Book review: How Will You Measure Your Life?

The book looks at real-life business cases and provides key insights into living.

As drinkers of Indian-made Indian liquor get more prosperous, makers of country liquor such as Globus Spirits, Radico Khaitan, Chandigarh Distilleries and GM Breweries are slowly moving up the ladder, upgrading their technology and packaging.

Hit hard by overseas rivals, solar panel manufacturers are changing strategies to stay on in the business.

Mismanagement pushes TN Electricity Board to the edge

Mismanagement has pushed the Tamil Nadu Electricity Board to the edge. And recent measures to revive it may fall short.

Japanese companies are trying to invest in India's growth, but expect India to meet them halfway.

Many investor advisory firms say that intra-group amalgamations are often a ploy by promoters to stealthily enhance their control over and boost valuations of group companies - a charge vociferously denied by promoter groups.

When it comes to broadband, particularly the wireless kind, Prakash Bajpai is a man possessed.  After building a low-cost Wi-Fi business, the man who heads Tikona Digital Networks is gearing up to take on the big boys in the mobile broadband arena.

Your cover story (Watch Your Step, July 8) aptly focussed on some of the vital questions of the hour: ailing leadership, policy paralysis and steps taken to revive the sinking economy.

Are quad-core phones really worth the money?

Quad-core processor is the future of mobile phones and the phones that run on it are 1.6 times quicker, or about 160 per cent faster than their dual-core counterparts.

Slowdown may hit increments too

The slowdown may also hit increments and the variable part of salaries.

Pranab Mukherjee's final stint as finance minister lasted a little over three years. It was a stint he is unlikely to recall with pride.

The monsoon's worst start in three years is threatening crops from rice to sugarcane.

The surge in corporate debt restructuring could be masking a spike in banks' non-performing assets.

The G20 is making fresh efforts to contain eurozone contagion.

Ikea's entry to be a game changer for retail?

While the potential appears huge, the government's condition requiring foreign retailers to source 30 per cent of the value of their goods locally, from small enterprises, could prove a sticking point.

The competition watchdog's crackdown on cement makers is justified, though some say it plays favourites.

Why Infosys is betting big on its Shanghai campus

Defying conventional wisdom, Infosys is building an 8,000-seat campus in Shanghai. Although the announcement has astonished the industry, the company says it is building the Shanghai campus with an eye on the future. It wants to lock up people supply.

An affordable ultrabook and a camera that pushes the limits.

The market is disappointed... This creates an impression that the RBI is comfortable with a relatively depreciating rupee rather than initiating action to make it appreciate, says Samiran Chakraborty.

Why southwest monsoon are crucial

Monsoon worries are back with rains in June having been 24 per cent below normal.

Why Pranab was the worst FM since 1991

Pranab Mukherjee has been the worst finance minister since the economy was liberalised in 1991.

The world's best restaurant migrates to Britain for ten days during the Olympic Games.

New products and their desirability quotient

This 900mm easy pull out drawer goes from a fridge to a freezer to an air tight pantry, at the touch of a button. Top drawer, we say.

A vision in leather

If shoemaking is a fine art, then the Tod's pallete is a magical blend of cuts, colours and fabrics.

Watchmaker Omega will keep time on the sidelines at Olympics

As the world gets set to witness the biggest races at the Olympics, watchmaker Omega will keep time on the sidelines.

John Abraham on how to take care of your bikes

His unfaltering love of bikes is no secret. Bollywood's resident hunk tells you how to build and take care of your own collection.

Photographer Babi Nobis and his wife and author Tina Nobis share top tips on the art.

In Switzerland, every room has a view and every building a history. Here's how Geneva's Mandarin Oriental took the story onward.

Pioneering a new trend in consumer experience, the ITC group has taken brand experience and engagement to a whole new level with the launch of the Fiama Di Wills Men website.

Get the perfect sporting look

As the 2012 Olympics draws nearer, July is all about sport, spirit and style. To look great on the field and off it, we help you gear up and get your game face on.

Good health on the go

Your smartphone's application store has a number of diet and health related applications that make it easy to keep tabs on your calorie intake and help you stick to a healthy lifestyle.

Being chained to your workstation or living out of a suitcase may reflect well on your paycheque but what does being on-the-go mean for your health?

The Damien Hirst retrospective at the Tate Modern, London, shows the artist in a light that is not necessarily flattering.

Fit at any age

Whether you've just hit 30 or are nearing 60, there's a an exercise regime and diet that's just right for you.

In our ongoing search for peace, meditation holds the key to contentment. It's wise to wake up to improving your mental health. After all, it really is all in the mind.

Behind story of Sirio Maccioni

When France met Italy in the sacred kitchens of Le Cirque, New York, food found new meanings. Here's a story of Sirio Maccioni and how he shaped the evolution of taste, culture and luxury.

Spanish sculptor on a creative journey

A Spanish sculptor embarks on a creative journey, one that begins at matter and ends at mind.